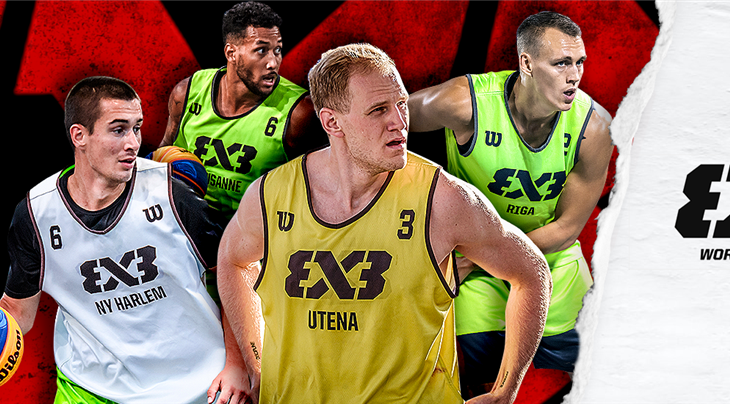 JEDDAH (Saudi Arabia) - After Masters events in Debrecen, Doha, and Jeddah, we have been gifted with top 3x3 action all season. Here are the top four players who amazed us, based on player value, from the World Tour 2020 season.

Vaitkus has been one of the most consistent forces in 3x3 this year, earning spots on the Doha Dream Team after being included in the World Tour return Dream Team. There truly is no weakness to the man’s game. The guy can shoot (40% from behind the arc), has a killer first step (3rd drives) and has a bag of moves, bigger than a fifth-grader school bag.

This season, he finished in the top-5 in the following categories: points per game, shooting efficiency, shooting value per game, highlights, double-5s, and drives. He did this all in just 13 games.

Utena Uniclub burst onto the scene this year, with Vaitkus at the center of the offense, earning two third-place finishes, and a runner-up at the Debrecen Masters. He may not earn the season MVP, but he finishes the season as possibly the most valuable player, per game at the 2020 World Tour and a name to watch in the future. The man has been money since joining NY Harlem, and he brought his full bag to the World Tour 2020. In four Masters events, King led the field in points per game (7.6) and shooting value per game (5.3), showcasing his big game scoring abilities and efficiency.

What's impressive with King is he doesn't miss. The guy shot a crazy 67% from inside the arc (6th overall), and 90% from the free-throw line! If we ignore Ivan Popovic (Ub, SRB) who did make all 11 free throws this year, he was the best shooter from the line. Not what you expect from a 6ft 9 in (2.06m) big man.

Once the big man got on the block, his skill and finishing ability showed why he is one of the best in the game. The highlight of his season may have been his Tissot Buzzer Beater against Novi Sad in Debrecen.

Lausanne had a balanced offensive system in 2020, with Westher Molteni leading the team (58 pts), following by Gilles Martin (51 pts), and Marco Lehmann (49 pts). Where Molteni separated himself was on the defensive end.

You did not want to meet ‘King Wes’ at the rim, because he was going to send it back like a bad meal. He finished second in blocks (12) and rebounds per game (5.1), including 23 offensive boards. Lausanne may not have had the 2020 season that they would have liked, but Molteni was great once again on both sides of the ball. The Doha Masters and Jeddah Final MVP is an obvious member of this list, leading the tour this year in total Player Value (143.3).

His top-line stats are impressive. ‘Robin’ finished second in total points and fourth in shooting value, scoring in a variety of ways. The part of his game that sets him apart is his playmaking. He finished first in highlights (dunks + blocks + key assist + buzzer-beaters), 20 more than the next best player, buoyed by his 44 key assists.

Though only a small part of his stat line, Miezis hit three Tissot Buzzer Beaters, including the World Tour Final winner, to lift Riga this season to their first title.

*5 Games or more to qualify