8 reasons why any team can win Lithuania's Hoptrans3x3 final 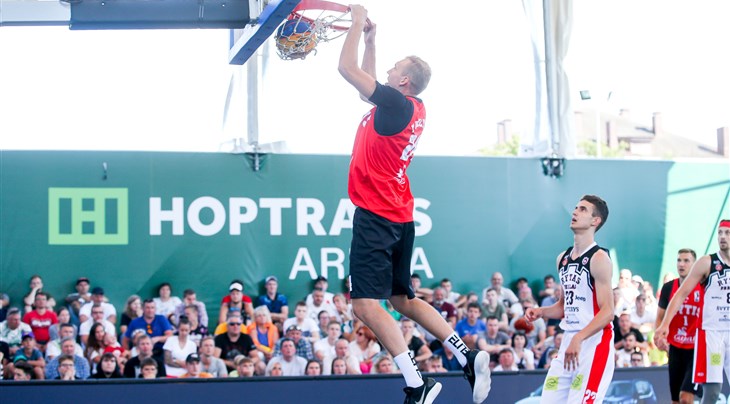 PALANGA (Lithuania) - 8 finalists, 8 reasons why anything can happen. After an exciting first three stops in Lithuania, it’s time to crown a winner of Hoptrans3x3.

Some of the finest basketball players in Lithuania have been putting the 3x3 format to the test over the past month, putting on a show for some of the best fans in the world.

Heading into the final stop, we take a closer look at the teams remaining in the field and why they stand a chance to take home first place and a World Tour qualifying spot.

The team puts up buckets. After winning Stop-1 and Stop-2, the squad leads the field heading into the final where they look to secure a trip to the 3x3 World Tour. They’ have so many weapons offensively with Darius Tarvydas (their leading scorer in Stop-1) and Ignas Vaitkus (top scorer in Stop-2) but have not been the same defensively since it was announced the 'Lithuanian Rodman' Zygimantas Skucas would miss the rest of the 3x3 season due to injury.

If there is one team in the field that knows how to win a 3x3 tournament end to end, it’s Sakiai. They came into the tournament as favorites after they won the FIBA 3x3 World Tour Montreal Masters last year. The lefty sharpshooter Marijus Uzupis finally found his range in Stop-3 (he led all scorers last week) and Sakiai have positioned themselves to peak just when the moment is right.

Sakiai Gulbele takes over Stop-3 of this #Hoptrans3x3 series after overthrowing @bcjuventus in the Final Game 💥🔥🥇🏆 pic.twitter.com/DT6N0fVDmI

Two words: Jonas Maciulis. The 3-time Olympian has been filling up the stat sheet all tournament long, including 65 points over stops 1 and 2. As long as he is producing at an MVP rate, the team stands a chance in the championship.

They have been led by the dynamic duo of former World Tour golden boy Ovidijus Varanauskas, the second leading per game scorer over the course of the event and Modestas Kumpys who has been a solid contributor throughout the month. If both players bring their best, the sky is the limit.

Evaldas Saulys has put on a star effort for Siauliai, who enter the finals as the 5th seed. He will need to continue his current pace, and then some, for the team to have a chance to take home first place.

While they come in as underdogs, they have the scoring punch to make some noise. Ignas Lukosius comes into the event after leading the enter field in 1-point baskets made in Stop-3 (18), playing in only three games. If he can continue that domination in the paint, we may see some surprising results.

Mintautas Bulanovas showed the rest of the field just how effective he can be when he gets going. In Stop-3, the 5th ranked player in Lithuania scored 31 total points, including 7 shots from behind the arc. If he can find his range in the championship, Dzukija is a team to watch out for.

The team has hung tough all tournament long but Arunas Mikalauskas has shown he's not afraid to get buckets in money time. For the first time in 3 stops, they made the Top 5 last week. These Neptunes might well produce a hit like Pharrell Williams in the final.

The final of the Hoptrans 3x3 event will take place this Friday, July 24 and Saturday, July 25. Check out all the 3x3 action on Youtube.com/FIBA3x3.