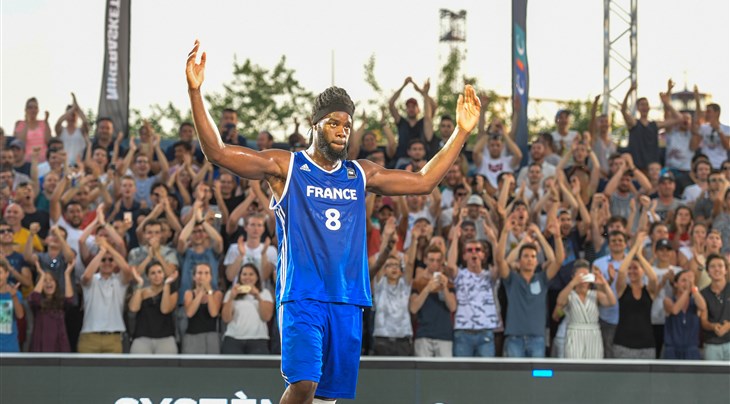 NANTES (France) - Orlando isn't the only place where hoops is returning because major 3x3 action in France is back! And it arrives with a vengeance when the star-studded Open de France starts on Saturday August 1, live on the official FIBA 3x3 YouTube channel.

The tournament - loaded with talent - continues 3x3's gradual return worldwide since the Covid-19 pandemic. There will be 12 teams in both men's and women's events with qualifying to take place on Friday (July 31) to determine the final two spots of each category.

In the men’s, Admiral Camp might just be the event’s headline act and are favorites to top Pool C. They boast long time France 3x3 star Dominique Gentil, who won silver at the FIBA 3x3 Europe Cup last year and bronze at the FIBA 3x3 World Cup 2017, which took place at the exact same venue on Parc des Chantiers in Nantes. Gentil joins the team who won the Open de France back in 2017 with the legendary Sy brothers (Amara and Bandja) and his good friend Andrew Albicy.

The 2019 FIBA Basketball World Cup bronze medalist will return to 3x3 for the first time in three years and has publicly vowed to put on "a show".

Pool D could become the group of death. The third team will come out of qualification but it already boasts in-form Team Paris, who have stars Angelo Tsagarakis, a World Cup 2017 bronze medalist, Jordan Aboudou and Antoine Eito.

Team Paris won the Open Plus De Saint Paul earlier this month but will be challenged by Ballistik, who are set to be a dark horse through exciting youngster Alex Vialaret.

Testament to France being a powerhouse, the women's category is stacked with talent. In Pool A, Poitiers Medley will be tough to beat despite losing superstar and world No.1 3x3 women's player Laetitia Guapo.

In Pools C and D, talented young teams 3nity and Junko are tipped to shine and could prove formidable opponents for the top rated teams later in the tournament. Both teams also include an U23 World Cup 2019 bronze medalist with Anna Ndjock and Maud Stervinou respectively).

Five teams will be battling for qualification as elite 3x3 action excitingly returns to Nantes.

Make sure you follow the action on FIBA 3x3's You Tube channel.