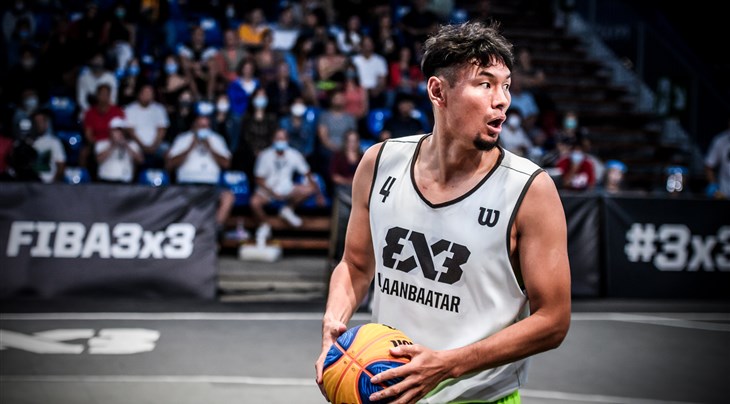 And the Mongolian team will fulfil their wish when they make their historic debut at the Jeddah Final on December 18-19. They are the first team from Mongolia to ever make the season decider.

It was a nervous wait for them during the recently concluded Doha Masters after finishing 11th on the World Tour standings following 3x3's return in Hungary. The top 10 teams had already qualified for Jeddah but Ulaanbaatar MMC Energy - who didn't play in Doha - had to rely on the right results to ensure they received a ticket.

Fortunately for them and 12th ranked Amsterdam, none of the possible contenders made the required semi-finals ensuring Ulaanbaatar MMC Energy ticked another impressive box for 3x3's Cinderella story Mongolia.

With a population of just three million, the North East Asian country is a stellar No.7 on the combined 3x3 rankings and the women's team last year directly qualified for the Tokyo Olympics.

Mongolia is traditionally known for producing athletes for individual events, especially combat sports but the women's 3x3 team made history by becoming the country's first sports team to qualify for the Olympics.

The continual success of Ulaanbaatar MMC Energy on the World Tour over the past three years has been important for the growth of 3x3 in Mongolia. They are led by the enforcer Delgernyam Davaasambuu, who is built like a bull, and the athletic Dulguun Enkhbat.

They made their World Tour debut at the Utsunomiya Masters 2017 and made a stunning impression with victory over No.1 seed Ljubljana in the opener en route to a surprising semi-final finish.

It was their only appearance on the World Tour that season but they qualified for three Masters in 2018 highlighted by a quarter-final finish in Chengdu. Ulaanbaatar MMC Energy stepped it up last year and memorably broke through on the pro circuit when they stunned the field to win their first-ever 3x3 Challenger with victory in Jeju.

Davaasambuu played bully ball throughout to finish with 39 points in 5 games in an MVP performance that proved he is in the elite 3x3 category. The triumph came just after their semi-final finish at the Los Angeles Masters but a lack of participation on the World Tour proved costly as Ulaanbaatar MMC Energy finished the season 14th on the standings to agonizingly miss out on the Utsunomiya Final.

They finally made it this time around but their form in Debrecen will cause some alarms after failing to make an impact in their 2 Masters appearances though they lost a tight quarter-final against NY Harlem at the Hungary Masters.

Of most concern was the form slump of Davaasambuu, who scored just 12 points overall and committed almost as many turnovers (9). He will need to recapture his past brilliance for the Mongolians to do what they traditionally do best and cause upsets in Jeddah.

Much of the scoring burden in Hungary fell on Tsenguunbayar Gotov, Mongolia's No.5 ranked player who handled the responsibility superbly.

But Ulaanbaatar MMC Energy, who boast 4 of Mongolia's top 5 ranked players, will need a more even spread to go deep in Saudi Arabia. They will also have to rediscover their physicality and passion - characteristics that make them normally so hard to beat.

But don't write them off just yet.

After all, these Mongolians have a special ability to produce their best against all the odds.