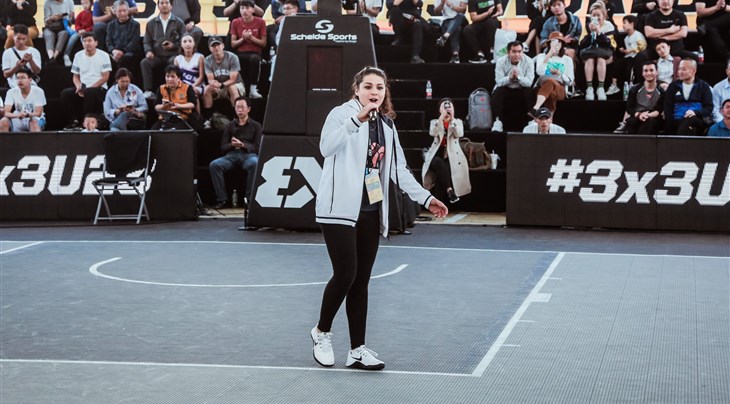 The genesis of the song – simply called ‘3x3 Anthem’ – was the FIBA 3x3 Europe Cup 2017, one of the first official 3x3 competitions where D’Alie competed for Team Italy.

“It was after a game”, the world’s 5th ranked player explained. “I was just walking down the road. I took out my phone and I just started creating these lyrics to the 1st verse. I think it was just an expression of the joy that I felt experiencing the game, the environment and the people. The words just flew out of me and I think it was just a response and an expression of the experience I lived on the court and in the environment.”

I had an opportunity to talk to the FIBA 3x3 team about that project at the FIBA Basketball Summit in 2018, where I was a speaker. There was an entertainment break and [the late former FIBA Secretary General] Patrick Baumann told me “do it right now”. So I started doing it with a Chinese drummer, who did not speak a word of English. We just went for it. It was a really cool experience because I had never done anything like that before and the response was very positive.”

After that, D’Alie was asked to perform the song at numerous times, including the FIBA 3x3 U23 World Cup 2018 and the FIBA 3x3 World Cup, becoming a de-facto anthem for 3x3 basketball. “It’s a beautiful song about all the things that makes 3x3 special,” FIBA 3x3 Managing Director Alex Sanchez said. “It’s fun, urban, universal, for everyone, engaging with the fans, competitive, spectacular, physical, unpredictable, a 10-minute sprint. The official video clip shows how well Rae [Lin D’Alie] and Rae’s career represent these values. We’re proud to count Rae as one of our ambassadors and to have collaborated with her on this exciting project.”

The song will be played before each FIBA 3x3 Official Competition in 2020 and be available on all FIBA 3x3 Social Media and Music channels.

“It was important for us to help such an iconic 3x3 player achieve one of her lifelong goal to produce a song,” Sanchez added. “It is a reminder that music is a key component of our game and that 3x3 is more than just a sport discipline, it’s an entire cultural movement.” The FIBA 3x3 Women’s Series 2019 top scorer described the project as “one of the top experiences of her life” and said it gave her platform to send several key messages about 3x3.

“My heart behind the song was to try to get interest in the movement and explain the discipline lyrically, which is the 1st verse,” D’Alie explained. The 3rd and last verse is to say “this is for everybody, all nations, all genders. It doesn’t matter if you wanna play or just watch, just come out and check it out. The 2nd verse is my favorite part because it is kind of a call to identity. You can be a leader, you can make a difference. “Be different, be a risk-taker, be a dream-chaser, be basically who you can be, just go out there and get it.”