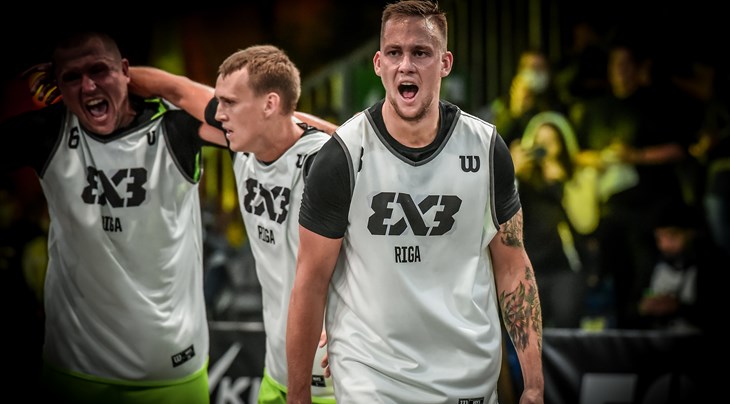 The world No.3 have cemented themselves as a 3x3 powerhouse and captivate through the nasty dunking of Lasmanis aka 'Batman' and the clutch shooting of Miezis aka 'Robin'.

But Team Riga's sustained success is about so much more than the superhero powers of their megastars. They have amazing chemistry and know how to produce victories from impossible situations.

And Team Riga want to share their secrets of success to Latvian youth and promote 3x3, which is quickly gaining in popularity in the Baltic country.

Back In The Days ... @klasmanis

With the FIBA 3x3 World Tour rescheduled due to the Covid-19 pandemic, the usually globetrotting Team Riga have remained mostly at home but used the time wisely and brought knowledge to talented young players keen to emulate their heroes.

"The team had more time because of the pandemic and they wanted to do something for the kids," Team Riga coach Raimonds Feldmanis said. "They traveled to the countryside too and had open training sessions. Our motto is share and care - so we want to share our knowledge and show them some of our secrets of how we play."

Maintaining their competitive edge on opponents, Feldmanis does not want to divulge Team Riga's trade secrets publicly but said they hoped to turn these educational sessions into a 3x3 academy down the track.

"We want to inspire youngsters to play 3x3 because it is getting more popular in Latvia," Feldmanis said. “The youngsters are really attracted to 3x3 because they like the quickness and the emotion displayed in the games.

"We can take that interest and turn it into a passion through providing them with expert knowledge."

Lasmanis and Miezis - two of 3x3's best players - are outstanding role models for young Latvians. "They have become so popular because kids have seen them rise and become the best at what they do," Feldmanis said. "And 3x3 becoming Olympic is so important because it provides inspiration for youngsters to see what is possible in this game."

It has been a frustrating year for Team Riga who were hoping to become 3x3's best team before the pandemic intervened. But they showed their strength by winning the Hungary Masters during 3x3's return in Debrecen and hopes are high they can build on that if the World Tour resumes soon.

"We were happy how we played in Hungary because it was tough going to an event without game practice," Feldmanis said. "Our goal is to be the best team in the world and we think there are areas we can get better."

Until they next dazzle fans, Team Riga will be the very best mentors for the next generation of Latvian 3x3 stars.