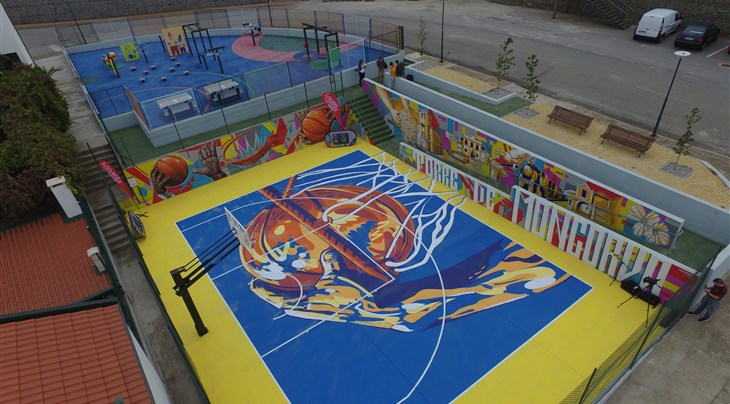 Outdoor courts are being refurbished and made more attractive by having eye-catching graffiti painted by local artists.

The second court has been completed, and unveiled, at the Polidesportivo do Olival das Bolas, a multi-sport park in the northern Portuguese Municipality of Torre de Moncorvo.

Children, teens and adults will now play the game in front of striking, colourful images that celebrate not only basketball but other aspects of life in their area.

The FPB firmly believes that the project will attract more young people to basketball and help the federation unearth new talents in areas where the lack of infrastructure has not allowed the sport to blossom.

The hope is that the new talents will not only thrive in 3x3 but also in the traditional game of basketball as well.

The recent unveiling of the new court in the Torre de Moncorvo was a special occasion, with the Secretary of State for Youth and Sports, Joao Paulo Rebelo, and FPB President Manuel Fernandes presenting an inauguration plaque at a ceremony.

FPB President Manuel Fernandes said at the ceremony: "This project is aligned with the federation's central goal: to have basketball reach all corners of the country. Moreover, it has special symbolism because Torre de Moncorvo is a village with strong basketball roots, tradition and culture."

The FPB President set the challenge to local authorities, including local schools and local clubs, to join them in this project.

Outdoor courts are set to be fixed up next in the municipalities of Vendas Novas, and Benavente. FIBA 3x3 has been a huge success around the world, which is going to be even more evident next year when the discipline is at the Olympics for the first time.

The FPB is enthusiastic about the 3x3 Basket Art project, proclaiming: "3x3 is an accessible game as it requires fewer athletes and less resources to be played in any region. That is the reason why today it is considered the most played urban sport in the world."

One of the hopes at the FPB is that major 3x3 events will be held in their country and they believe that the 3x3 Art Project can help strengthen their stature in international basketball.