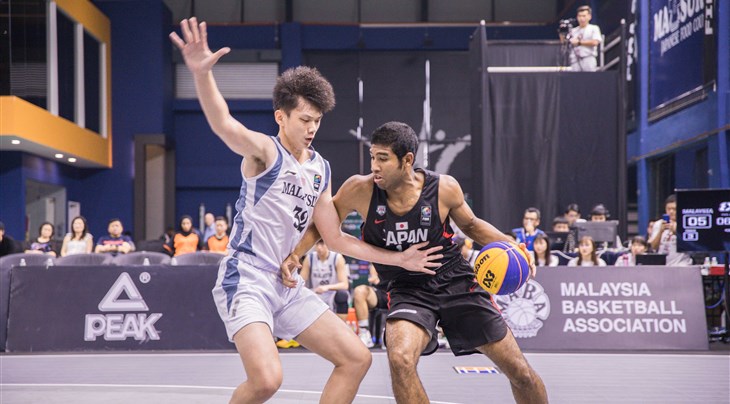 The No.10 seeds topped Pool A after thrashing hosts Malaysia and stunning No.1 seeds China. Yokochi scored 10 points across the two games but his impact went far beyond the box score. The 17-year-old relentlessly attacked the hoop and numerously finished it off at the rim.

But on many other occasions he kicked out to Japan’s slew of dangerous shooters. The formula proved hard to stop and was the key to Japan’s unbeaten Day 1. He also provided tough defense to underline his all-round game. Yokochi said aggressiveness was the key to his game. “I like to attack and get to the rim but it isn’t always possible to score,” he said. “But when I drive it creates space and open shots for my teammates. I want to keep improving my passing.”

Making his FIBA 3x3 U18 Asia Cup debut, Yokochi’s confidence rubbed off on his teammates as Japan made a major statement. Although, surprisingly, Japan were nervous ahead of Day 1.

“We haven’t practiced a lot and we were actually quite tense coming into the games,” Yokochi said. “To beat a really strong team like China was a great effort and we played really well.”

Japan are suddenly firmly in the title mix although they won’t get ahead of themselves. “We want to go all the way but in our next meeting we have to study all aspects of the game against China,” he said. “There is always room for improvement and I think we can get even better.”

A title for Japan would be a confidence boost ahead of a momentous period for 3x3 culminating in next year’s historic Olympics debut at the Tokyo Games. Yokochi hoped to be part of Japan’s line-up in front of their beloved fans.

“I would be so happy and proud to represent Japan at a home Olympics," he said.

Japan's next game will be against Pool C's second-placed team in the quarter-finals on Day 3.