Who will win the dunk contest at FIBA 3x3 World Tour Utsunomiya Final? 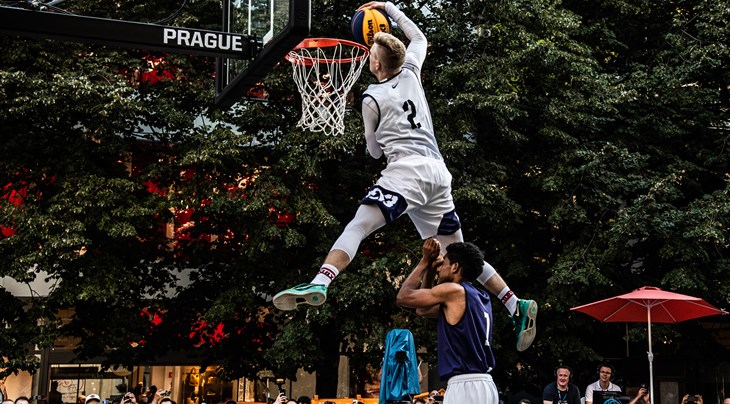 UTSUNOMIYA (FIBA 3x3 World Tour 2019) - The dunk contest is everyone's favorite event and we've got a monster lineup in the season-ending Utsunomiya Final.

The poor rims are going to be destroyed worse than Westeros as three of the best dunkers in the world square off in a battle between New School and Old School.

Let's have a look at the trio aiming to take out the dunking crown.

Let's start with one of the two young guns. 22-year-old Rivera is one of the hottest dunkers on the planet and announced himself when he blew away the competition to win the title in Montreal.

It's unfair that he is already so good at a young age. Rivera is the complete package. He can jump higher than House of Pain but he is an artist at heart. And a daredevil.

You don't know what crazy stunt he is going to attempt next. Usually it involves a volunteer, where he does gravity defying tricks like somehow spinning like a ballerina - all while he is walking on air!

He can pull out his trademark dunk - the 360 between the legs - when he needs to but the Puerto Rico-born entertainer is not likely to play things safe. That's the power of youth. This dude has no fear, he thinks he can legitimately pull off any dunk.

Rivera has the nickname 'Babyface' but his dunks should only be tried by grown men. Believe us.

The stage is set for Isaiah Rivera to announce himself as one of the world's very best dunkers.

The Pole is even younger than Rivera. He's only 21 but has already a FIBA 3x3 World Cup 2019 silver medal after a spectacular performance in Amsterdam mid-year. And he's won three Masters titles, including back-to-back victories in Debrecen and Prague.

The new kid on the block can dunk over volunteers standing on chairs through an insane leap like he has springs under his shoes. Grabo loves dipping like Winnie the Pooh and he's not afraid to try something new to please the crowd. Power of youth, again!

He did just that in Prague when he finished things off with an unbelievable behind the back dunk off the catch.

Grabo might just do something filthy on the biggest stage of them all.

Overlook the master at your peril. The Ukrainian is a dunk legend and will be aiming to teach the young punks a lesson. He's won 7 - 7! - Masters titles and is a dual FIBA 3x3 World Cup gold medalist.

He is a natural born winner and will use all his experience to overcome the energy from the youngsters.

His signature win dunk - where he sends the ball through the legs along the baseline with perfect timing is the smoothest - or smoovest? - thing you'll see.

Another of his favorites is when he flips it behind the back then somehow goes between the legs before finishing with the one-hand. We still don't know how he does that, no matter how many times we've seen it!

But Smoove continues to get better. He works on his craft relentlessly. You know this because in the dunk off recently in Jeddah he threw down a creative slam off the lob from his Ukrainian bro Vadim 'Miller' Poddubchenko.

What does he have in store ? Can't wait to find out.

If he triumphs in Utsunomiya, Smoove will have aged better than De Niro and Pacino in The Irishman. And delivered a win for Old School.