Who can challenge Chinese teams at the 3x3 FISU University World Cup? 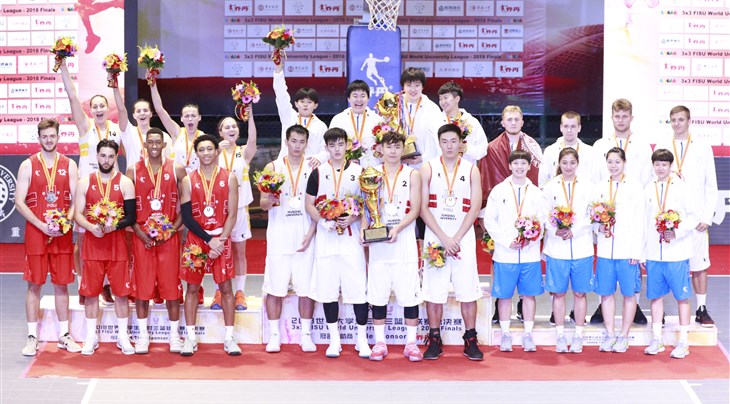 XIAMEN – As the fifth edition of the tremendously popular 3x3 FISU University World Cup gets underway in China on Thursday, all eyes will be on defending champions Tsinghua University and Huaqiao University, who won on home court last year.

The average height in the Chinese port city of Xiamen has just shot up dramatically over the last two days, as 128 of the best 3x3 university ballers in the world arrived ahead of the 3x3 FISU University World Cup. The quality of basketball too, will soar over the next four days as teams from five continents take on the challenge to become university world champion.

This unique event that pits university teams against each other is being held on the courts of Huaqiao University in Xiamen for the fifth year in a row, from 31 October to 3 November. Huaqiao University automatically qualified for the finals by virtue of being hosts, not to mention defending champions. Star player Zheng Yi will once again be one to watch; the top-ranked player in China, who is also part of the national team.

Huaqiao University will be joined by the women’s defending champions Tsinghua University in looking to retain that top spot on the podium.

“This year, we’re going to defend our champion’s title!” says Ma Jiaying of Tsinghua, who is a lot more relaxed this time round. She says she and her team have come to Xiamen after a week of intensive training that focused on movements and tactics specific to 3x3. “Hopefully I can play my best,” she adds.

They will have their task cut out, though. Not only are other former champions in the field – like Chinese Culture University of Taipei – but also several squads that have come close to winning and have returning athletes who want to go one better this time.

One of the strong teams from Oceania are Lincoln University from New Zealand. Captain Connie Poletti is a returning athlete playing her third University World Cup, along with teammate Ajiah Pepe who is returning for her second.

“I am looking forward to playing against some amazing athletes from all over the world,” says an excited Poletti. “It is always an epic tournament and a great opportunity to immerse ourselves in a different culture. The goal for our team is to be competitive in every game. It would be awesome to get few wins under the belt too, but we are also going out there to have fun!”

Poletti mentions Rosalia ‘Rosie’ Samia as someone to watch out for, even though she is only in her first year at university. “She is already dominating basketball in New Zealand,” adds Poletti. “We are excited to see how she does this tournament.”

Over on the men’s side, there are returning squads and first timers alike. Huaqiao will have to contend with other experienced sides like Mon-Altius Physical Education Institute of Mongolia and Macquarie University of Australia, among others. There might be surprise packages too, with debutantes like University of Zagreb, Croatia, who are enthused about their first opportunity on the World Cup stage.

“No one on our team has played in the University World Cup - 3x3 finals before. Porto was our first experience on the international stage,” says captain Lovro Mandalinić, referring to the European continental qualifying tournament that they came through.

“We are looking forward to a great tournament,” continues Mandalinić. “Since it is our first World Cup, our expectations are not too high. We would love to advance in to the second round and see how good we really are, up against the best in the world.”

The best university teams in the world will indeed prove their mettle over the next four days, as the champions will be crowned on 3 November on the hallowed half-courts of Huaqiao University. Find out more about the teams from Africa here, those from Asia here and top squads from Oceania here.

All action will be streamed live on youtube.com/FIBA3x3 starting with the Opening Ceremony on 31 October at 14:00 local time, or 06:00 GMT. The women’s final will start at 09:15 GMT on Sunday, 3 November and the men’s final will follow at 09:40. On the sidelines of the main competition there will also be shootout and slam dunk finals on Saturday, 2 November at 12:40 GMT and 12:55 GMT.