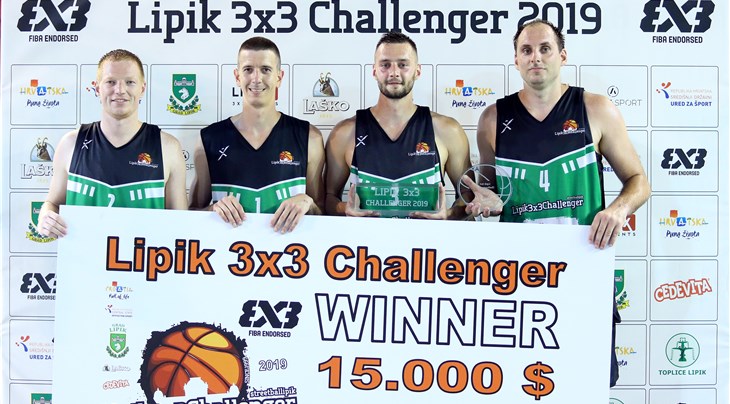 They were:No.1 in one-point % and points allowed per game; No.2 in points per game.

The No.4 seeds started slowly with a tough opening victory against qualifiers Spalato (CRO) before going down 22-14 to Kranj (SLO).

But the knockout stages brought the best out of them with Vrbas dominating talented youngsters Lausanne (SUI) in the quarter-finals and then giving Ventspils Ghetto (LAT) a beatdown in the semis.

It meant they had a chance at exacting revenge against Kranj in the final and the Serbs did just that to claim the title. After a sloppy Day 1, Vrbas were far better defensively and made it extremely difficult for opponents to score.

But they were also potent offensively with MVP Danilo Mijatovic and Strahinja Stojacic proving an irresistible one-two punch. The runner's up: Kranj (SLO)

Much like Vrbas, No.5 seeds Kranj struggled against Spalato and needed overtime to beat the feisty team inspired by the home crowd. Then Kranj clicked into gear with victory against Vrbas and overcame compatriots Ljubljana (SLO) in the quarter-finals.

But they saved their best for the semi-finals with a stunning upset of world No.1 Novi Sad (SRB) who boasted their full-strength side. Kranj impressively stifled Novi Sad's firepower with hard-nosed D and then kept their cool in the dying stages to complete a 17-16 win for the ages.

Kranj fell short in the final but can be well pleased with their tournament.

Terrific Tratnik: Igor Tratnik dominated Kranj's sensational campaign and was an enforcer for the team. He was a physical presence and led the tournament in rebounding and blocks.

Tratnik was Kranj's go-to scorer along with Mensud Julevic and was the star performer against Novi Sad with his spectacular game punctuated by two dunks.

Kranj easily handled Vrbas in the pool stage but this was going to be different.

Buckets were hard to come by early which wasn't surprising considering the defensive mastery of the two teams. Vrbas went down low to big fella Danilo Mijatovic who threatened to break the game open with four quick points.

Vrbas started firing outside with two-pointers from Ivan Popovic and Strahinja Stojacic stretching their lead to 6 points. But the Slovenians weren't going to roll over and they reduced the margin to 2 when Mensud Julevic went bang, bang from beyond the arc.

Under pressure, Vrbas went to the reliable source of Stojacic who drove to the basket for the hoop and foul. He then hit the free throw to give Vrbas breathing room. Kranj kept fighting but Mijatovic hit three quick points, including a step back two, to sink the Slovenians. Key Stats:
- No.2 seeds Ljubljana and No.3 Humpolec Bernard (CZE) were knocked out in the quarter-finals.
- Vrbas' convincing semi-final victory over Ventspils Ghetto was the fastest game of the tournament (6'30" of playing time).
- Strahinja Stojacic was dazzling for Vrbas and an exciting machine with a tournament best 21 highlights.
- Novi Sad were stunned in the semis but Dusan Bulut again had a brilliant tournament with a tournament-high 8 points per game.