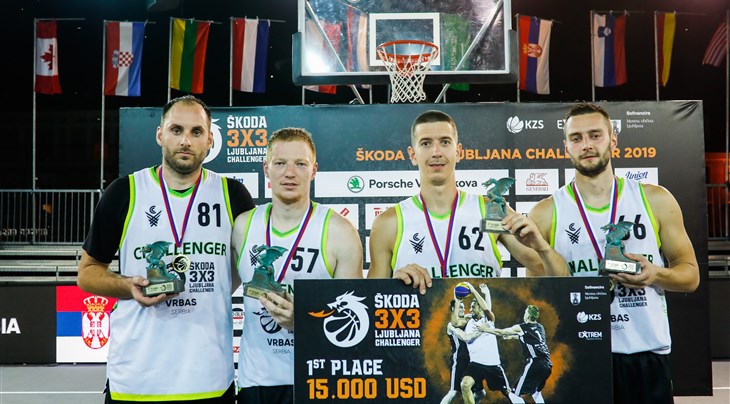 LJUBLJANA (Slovenia) – Vrbas (SRB) spoiled the Slovenian party after beating Piran (SLO) and taking out the Ljubljana Challenger on August 17-18, 2019.

World No.9 Vrabs have proven this season that they are a force to be reckoned with. The Saskatoon Masters runners-up were unbeaten in Slovenia winning all five games and notching impressive victories against rising powerhouse Edmonton (CAN) and Amsterdam (NED).

The No.4 seeds struggled past Gdansk Energa 3x3 (POL) 19-18 in the semi-finals with Strahinja Stojacic proving the hero with a team-high 9 points and inspiring his teammates with two dunks.

It meant Vrbas had a chance at revenge against Piran, who defeated them in the Saskatoon Masters final. It was a hostile environment but Vrbas silenced the crowd with devastating play. Stojacic was well held but Ivan Popovic proved unstoppable with a game-high 11 points as Vrbas put on a clinic to run away with the title.

It was a balanced team effort for Vrbas with all four players finishing in the top six in the overall scoring led by Stojacic’s 27 points. Stojacic had spectators jumping out of their seats averaging an incredible 6 highlights per game in a dominant tournament.

Strahinja Stojacic is still dancing on the court! 🏀🏀#3x3challenger pic.twitter.com/IDzW4geqQY

Number 1 in points per game, one-point % and highlights.

With an array of options, Vrbas scored at will and only narrowly were unable to win under the time limit in the quarters and semis.

Their size proved impossible to stop as Vrbas hit 71% from one point and relied less on the two-piece compared to other teams.

Piran have been one of the hottest teams on the World Tour after winning in Saskatoon and followed that effort with a respectable semi-finals finish at the Prague Masters.

The No.1 seeds fell short in front of the home fans but still had another solid tournament even though they suffered a shock loss early against No.9 seeds Šakiai Gulbelė (LTU).

Prague Masters runners-up Princeton (USA) loomed as a tough challenge in the quarter-finals but young gun Milan Kovačević had other ideas.

In one of the most incredible performances of the season, the 23-year-old scored 16 points, including three makes from deep, as he destroyed Princeton and made the crowd party like it was New Year’s Eve 1999.

Their momentum continued with a thrilling 17-16 victory over Jeddah (KSA) in the semis with Kovačević again firing with 8 points before Piran ran out of steam in the final.

New star: Piran are one of the historic 3x3 teams and led by stars Simon Finzgar and Gašper Ovnik. But they have a new sensation in Kovačević, who led the scorers with an incredible 42 points (8.4 avg). He has become one of the most exciting 3x3 prospects after a breakout MVP performance in Ljubljana.

A Star is Born, the Slovenian 🇸🇮 version? @kovacevicxmilan outscored the entire @princeton3x3 🇺🇸 squad with 16 points 🎯 in the Ljubljana Challenger QF this weekend 😱

A capacity crowd of 2200 were hoping to party and Piran gave them reason to cheer early. Adin Kavgic popped from deep and Simon Finzgar showed off his moves with a stepback two-piece in a tight start.

Ivan Popovic was scoring from everywhere and none more spectacular than the Dr J wraparound layup to keep Vrbas in the game.

Piran’s pretty passing gave them the edge and they held a 10-7 lead at the midway point. Then it suddenly flipped. Piran went ice cold and missed everything, while Vrbas were in heat check mode. They scored six straight points to take command.

Strahinja Stojacic struggled from the field but provided nasty D as he taught Gašper Ovnik a lesson with a filthy rejection on the baseline. Vrbas were unstoppable and scored the last eight points as Popovic fittingly finished it off in style with a two-piece from Serbia to stun the home crowd.

Vrbas and Jeddah join World No.2 Riga Ghetto (LAT), No.3 Liman (SRB), no.5 Piran (SLO), No.6 NY Harlem (USA) and No.1 1 Edmonton (CAN) to have qualified for Debrecen. Young guns Lausanne (SUI) and Gagarin (RUS) are also amongst teams to have qualified.

Key Stats:
- Gdańsk Energa 3x3 (POL) made it to the semis through the qualifying draw, while No.15 seeds Jeddah (KSA) also made it to the final four.
- Vrbas’ beat down of Piran in the final was the fifth fastest game of the tournament (8’15” of playing time).
- Gdansk’s fairy tale run was led by superstar Michael Hicks, who poured in 36 points at a tournament high average of 9 per game.
- Strahinja Stojacic did everything for Vrbas. He led them in scoring, highlights, blocks, key assists and rebounds.