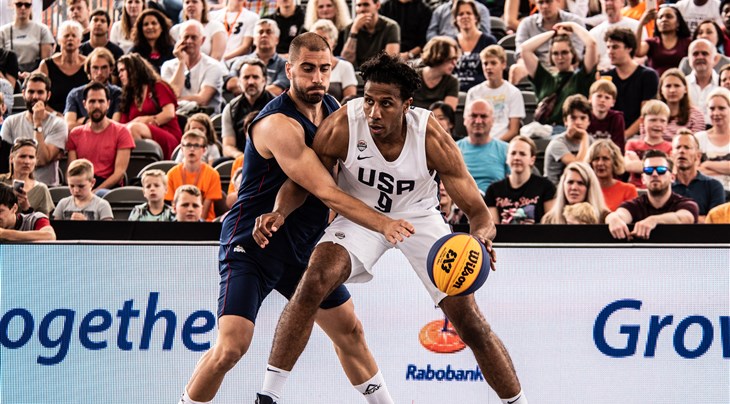 AMSTERDAM (Netherlands) - After years of frustration on the 3x3 court, Team USA finally broke through and defeated Serbia, 21-16, for the first time ever on Day 2 of the FIBA 3x3 World Cup 2019.

The Americans notched the historic victory in a strong way, leading by as many as 8 points against a stacked, experienced and heavily favored Serbian squad that entered the contest riding high on a 15-game winning streak in FIBA 3x3 official competitions (undefeated in 2018 at the World Cup and Europe Cup).

The Serbians, however, had no answer for the hot shooting of former NBA player Robbie Hummel, who drilled three two-pointers en route to a game-high 9 points, while Kareem Maddox dominated the interior with 6 points and 5 rebounds.

The 6ft 8in (2.04m) Maddox tried to temper their excitement after the win, but couldn't contain his confidence.

"We feel good," he said. "It's game number one of pool play, so we're just getting started. We're ready to go."

Powered by the dynamic duo of world number one 3x3 player Dusan Bulut and 'The Maestro' Dejan Majstorovic, Serbia were the overall top seeds of the tournament, but they had trouble scrambling on defense trying to hamper the wicked outside shooting of the Americans, who connected on a total of four times from beyond the two-point arc.

At the forefront, of course, was former college star Hummel, who opened the flood gates with a booming deuce over no less than Bulut himself.

🇺🇸 @RobbieHummel in the eye of the #1 player in the world! #3x3WT pic.twitter.com/vZ04iLQHGT

"Robbie Hummel - that's all I got to say," declared Maddox. "He shot the lights out. We played great defense as a team and stayed tough against a really tough team. They're the number one team in the world for a reason."

The Americans continue their quest for the country's first ever FIBA 3x3 World Cup crown on the next three days, where they will play Turkey, Korea and Netherlands to round out pool play. Team USA's best finish in the event's history was second place in 2016, where they lost to Serbia in the Final with current Golden State Warrior Alfonzo McKinnie.

It's still a long way, but Maddox and his teammates know that in order to complete their mission in Amsterdam, they'll need to remain locked in and leaving everything they have on the floor.

"We just have to do the same thing we've been doing - holding each other accountable, not letting anyone slack off, and make sure we're all working hard," he said. "It sounds cliche, but it's what you got to do to grind out this World Cup."

Only 2 teams make it out of the 5-team pools at the FIBA 3x3 World Cup. Serbia will play a win-or-probably-go-home game against the Dutch hosts today at 7.30pm local time (GMT+2).

Fans in the US (and Canada) can rewatch the game and follow the FIBA 3x3 World Cup live on FloSports.