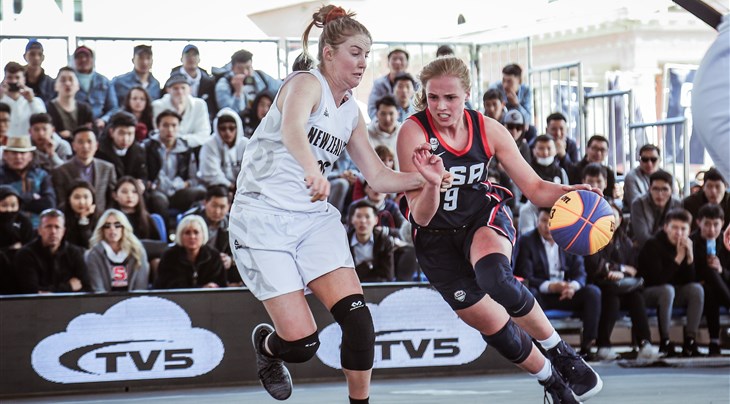 ULAANBAATAR (FIBA 3x3 U18 World Cup) – Team USA lived up to their hype with strong victories to top their respective pools in the Men’s and Women’s competition in Mongolia on June 4, 2019.

The USA women squad lived up to their hype coming into the tournament with victories over New Zealand (11-20) and Russia (8-19) led by the exciting play of Hailey Van Lith and strong scoring presence of Olivia Cochran and Rickea Jackson.

Japan’s Women produced a strong come-back victory over Indonesia (11-15) and took victory over Switzerland (14-8) to go 2-0 to start their U18 World Cup campaign in Group D.

Turkey’s Men were keen to stamp their name on the World Cup pool stage as they grabbed two victories over higher seeds Slovenia (10-12) and Italy (16-10) with even team scoring and strong defence to top Group A in Ulaanbaatar.

The first action in Group A also saw Slovenia bounce back to upset the number one seeded China (12-21) and keep their progression hopes alive.

In Group C USA began their tournament with a bang with a highlight-filled victory (21-13) over Latvia and Georgia (21-9). Dawson Garcia lead the scoring for the USA with 17 points after their first Day at the tournament.

Hosts Mongolia upset Latvia (16-20) much to the delight of the home crowd behind the play of Enkhiin-Od Sharavjamts (11 points) to open their tournament and keep Latvia winless to start. In the last game of the day, hosts Mongolia brought the house down once again after defeating Belarus to remain undefeated in the competition.