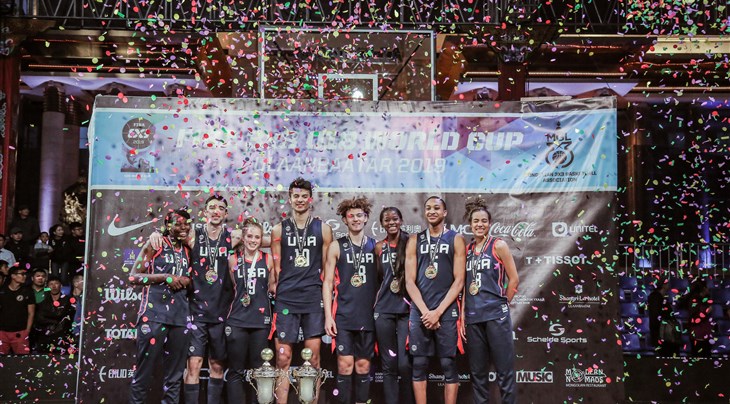 No team has previously won this competition with both men and women in the same edition.

Led by tournament MVP Hailey Van Lith and Team of the Tournament member Rickea Jackson, USA were undefeated in Mongolia. Their biggest challenge came in the final, a hard-fought 19-13 victory against New Zealand, who starred the last member of the Team of the Tournament, joint-top scorer Charlisse Leger-Walker. France took home the bronze medal by defeating China (15-13) in the third-place game.

USA had never won gold in the men's category at a FIBA 3x3 World Cup, regardless of the age category (senior, U23, U18). After winning all their pool games before the limit, they survived 3 consecutive scares, including an 18-17 thriller in the semi-finals against Russia and a 16-12 nail-biter in the final against Turkey. The tournament joint-top scorer Dawson Garcia was named MVP of the tournament and was joined on the Team of the Tournament by the other scoring leader, Argentina rising star Mateo Diaz and Turkey's Cagatay Özkan.

USA added 1 more medal, this time silver in the dunk contest thanks to Nimari Burnett. For their first participation in a FIBA 3x3 World Cup event, the Dominican Republic won gold via Fuhit Edouard. Aliaksei Navoichyk struck bronze for Belarus.

The event took place on the iconic Sukhbaatar Square as Ulaanbaatar became the capital of 3x3 for 9 straight days and set up a new record of consecutive FIBA 3x3 Official competitions with the FIBA 3x3 U18 World Cup, 2 stops of the FIBA 3x3 U23 Nations League and a 3x3 Challenger of the professional circuit.