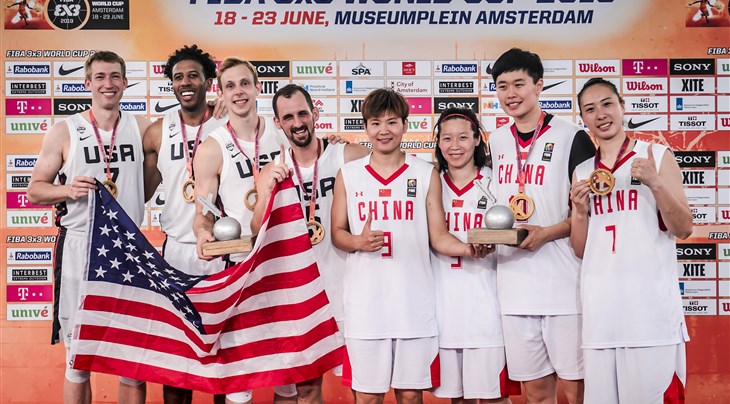 NETHERLANDS (FIBA 3x3 World Cup 2019) – The USA won their first men’s title, while China also created history with a triumph in the women’s category to cap a thrilling FIBA 3x3 World Cup in Amsterdam from June 18-23, 2019.

The USA started the tournament by ending defending champion Serbia’s 15-game winning streak and ran through the competition during a flawless campaign with a 7-0 record.

Sharpshooter Damon Huffman was sizzling from deep with a game-high 8 points to lead the US to an 18-14 victory over Latvia in the final. Kareem Maddox dominated inside with 5 points and 7 rebounds to help end Europe’s dominance at the World Cup.

Latvia were led by ‘Batman and Robin’ duo Karlis Lasmanis and Nauris Miezis, who combined for 12 points.

In the men's bronze medal match, Poland upset reigning champions Serbia 18-15 thanks largely to a dominant performance from Michael Hicks, who finished with a jaw-dropping 13 points and 8 rebounds.

It means Poland joined USA and Latvia into the Olympic qualifying tournament next March.

Hicks topped all scorers in the competition with 71 points, while USA’s Robbie Hummel was named MVP of the men's category. He was also joined by Hicks and Lasmanis on the Team of the Tournament.

In the women’s category, world No.1 China wrapped up a perfect 7-0 campaign with a 19-13 victory over Hungary. They dominated from the start by scoring the first seven points and ZhiTing Zhang controlled the paint throughout to finish with 8 points and 6 rebounds.

In the women's bronze medal clash, France beat Australia for the second time in the tournament with an easy 21-9 victory. Migna Touré top-scored with 7 points, while Ana Maria Filip had 6 points and 7 rebounds.

On Olympic Day coincidentally, China, Hungary and France made it through to the Olympic qualifying tournament. JiaYin Jiang was named women’s MVP and joined by Migna Touré and Cyesha Goree in the Team of the Tournament. Bec Cole from Australia was the leading scorer with 46 points.

The event was held on Museumplein in the heart of the Dutch capital, with the iconic Rijskmuseum for urban backdrop. The FIBA 3x3 World Cup venue was the biggest-ever FIBA 3x3 temporary venue. It attracted a sell-out crowd of 2,561 fans on the last day of competition, including FIBA Secretary General Andreas Zagklis. The World Cup was the main event of the Urban Sports Week, which transformed the entire square into an urban cultural festival.

Vadim ‘Miller’ Poddubchenko took out the Jack's Casino dunk contest – his first win at a World Cup. After an epic final, he was deadlocked with Piotr Grabowski from Poland on 87 points forcing the duo to compete for the title in a dunk off. The Ukrainian pulled off an incredible one-handed 360 off the bounce to claim victory. Kristaps Dargais (Latvia) struck bronze.