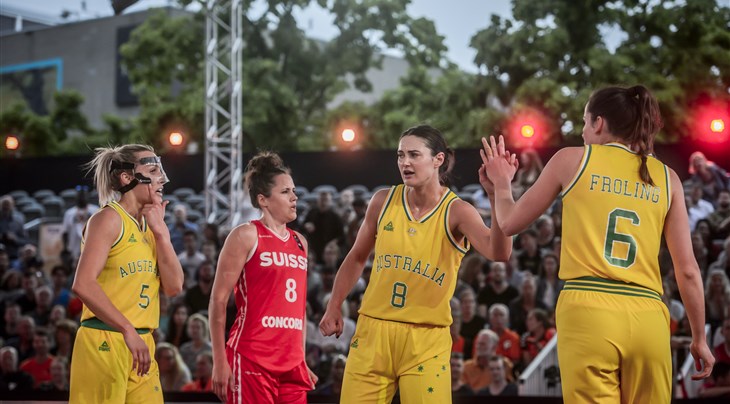 AMSTERDAM (Netherlands) - USA's men and Australia's women proved why they are among the favorites to win the FIBA 3x3 World Cup on June 19.

USA's men made history on Wednesday after ending Serbia's 15-game winning streak. It was the first time in 5 tries that USA won that matchup in FIBA 3x3 World cup history. Robbie Hummel was stunning in the 21-16 win. The former NBA player scored a game-high 9 points and backed it up with a 14-point explosion against Turkey to rank 1st in the scoring charts.

Serbia bounced back against the Dutch hosts (18-14) but the 4-time world champs could still face elimination on Friday.

In the other men's pool, Europe Cup 2016 winners Slovenia finished undefeated today after a tough win against Lithuania courtesy of a Tissot buzzer beater from Gasper Ovnik (21-20) and another victory versus China (20-13). Lithuania are second in the pool right now after shocking France in their first game of the day. Qatar can still qualify after defeating China.

On the women's side, Asia Cup reigning champs Australia didn't give a chance to neither Switzerland (20-14) nor Andorra (22-9). France are second in the pool after defeating both Japan and Andorra.

Women's pool D was a 'Rae Rae' show. The MVP of the last World Cup guided Italy to two wins over New Zealand ( 18-12) and Ukraine (17-15). But Russia still lead the pool after a 1-point victory against Ukraine (13-12) and a comfortable win over Indonesia (22-5). Their match-up on the 4th day of competition will be a rematch of last year's World Cup final. Just prepare the popcorn already.

No matter where you are, @rmdalie11 will find you! 🇮🇹 #3x3WC

In the individual contests, Marie-Eve Paget (FRA), Shadi Abdolvand (IRI), Rae Lin D'Alie (ITA) and Carla Punti (AND) advanced to the Skills Contest final and Uzupis Marijus (LTU) caught fire in the men's T-Mobile & Sony Shoot-Out Contest Qualifier and will compete against Stanislav Tymofeienko (UKR) to decide who joins Edgar Krumins (LAT) in the final after they were tied with 6 points in 27 seconds.