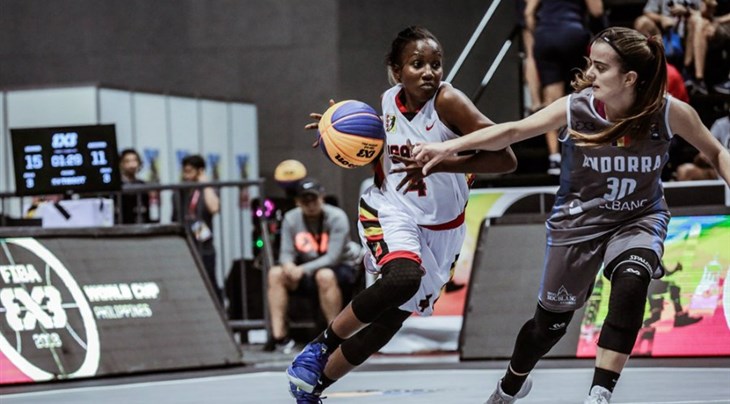 KAMPALA (Uganda) - Having competed at the inaugural edition last year, Uganda head into the FIBA 3x3 U23 World Cup 2019 with new dreams, bigger expectations and a hunger to etch their names among the elite teams in the world.

Placed in Pool C along with the highly ranked Mongolia who are third in the world, Romania, Germany and Iran, Africa's only representatives have their work cut out as they head to Lanzhou, China where the competition tips off from October 2-6.

It is familiar territory for Ritah Imanishimwe who was part of the Ugandan setup last year guiding the team to a 13th place finish and brings a lot of exposure and experience into this year's edition.

"COMPOSURE AS A TEAM WILL HELP US GO THROUGH THIS POOL. WE NEED TO KEEP FOCUSED, PLAY TOGETHER AND ABOVE ALL, WE WANT TO WIN FROM THE VERY FIRST GAME TO THE LAST OTHERWISE I AM CONTENTED WITH THE TEAM WE HAVE TO BE ABLE TO COMPETE BEST."- Imanishimwe

Uganda open their campaign against Romania on October 3 at 1pm GMT before taking on Germany at 4.15pm GMT on the same day.

They will rest the following day before returning to action on October 5 to take on Iran and Mongolia in a bid for a place in the knockout stages of the world showpiece.

A 17-11 victory over Romania last year will give Imanishimwe and her teammates confidence but they are also wary that the European side could seek revenge.

She spoke to FIBA.basketball exclusively and said, "We have to keep together as a unit on court, be selfless and play for each other and also be patient with the ball."

"This being the World Cup and not just an African competition, it is a plus to the country that we still got the opportunity to play there and a good performance will leave a note on how good Ugandan basketball is."

For Imanishimwe who has also featured for Uganda at the FIBA 3x3 World Cup as well two back-to-back FIBA 3x3 Africa Cup events, this is another chance to go out there and make a case for the growth of the shorter version of the game on the African continent and that there are proceeds in being consistent.

"It is always a pleasure to represent Uganda. This opportunity gives us a chance to correct what was not done right at the last year's edition," she said.

"Composure as a team will help us go through this pool. We need to keep focused, play together and above all, we need to win from the very first game to the last otherwise I am contented with the team we have to be able to compete best. "

For Imanishimwe and Uganda, a positive performance in their opening game will go a long way in setting the pace for the rest of the tournament as they look to get to the business end of the world competition.

Only seven countries will send both their men and women’s U23 national teams to China this year including the hosts China, Italy, Mongolia, Netherlands, Romania, Russia and Ukraine.

Russia are the reigning champions in both the men and women's categories and have announced their ambitions to defend both their titles.