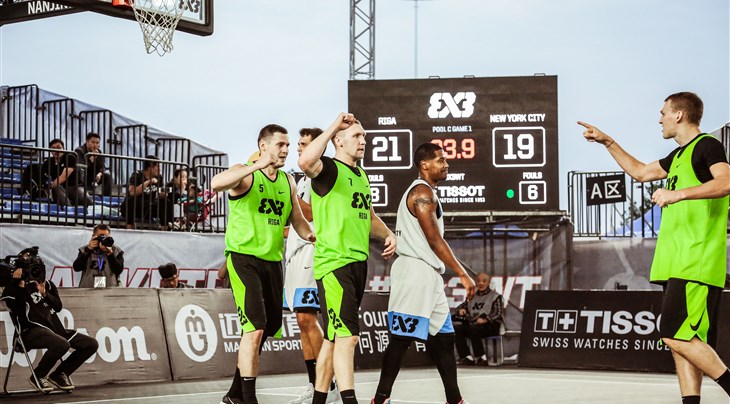 JEDDAH (Saudi Arabia) - No.1 seeds Riga Ghetto (LAT) are set to be challenged by desperate teams Lyon (FRA) and Balanga Chooks (PHI) to start the Jeddah Masters on October 18-19.

There is much intrigue on Pool A headlined by world No.2 Riga Ghetto who will be tasked with quickly rebounding from a semi-final defeat to Edmonton (CAN) at the Nanjing Masters.

Again without superstar Karlis Lasmanis, the Latvians could be vulnerable against Lyon and Balanga Chooks who are both still in the hunt to qualify for the Utsunomiya Final.

The Jeddah Masters is the final stop before next month's finale, where there are still two positions up for grabs.

World No.3 Liman (SRB) receive top billing in Pool B where their main threat is expected to be against Utsunomiya (JPN) who are also in the running to qualify for their home event. The Serbs will boast the same lineup that fell short in Nanjing, where they lost to Sakiai Gulbele (LTU) in the semis.

No.3 seeds Piran (SLO) highlight Pool C and face a tough opening game against hosts Jeddah (KSA) who have been a surprise packet in the second half of the season having made the knockout stages of the Debrecen and Los Angeles Masters, powered by L.A. Times.

Currently 13th on the World Tour standings, there is much at stake for Jeddah in front of their beloved fans.

No.4 seeds Sakiai Gulbele (LTU) could be the favorite having finished winners in Montreal and runners-up in Nanjing after a spectacular campaign. Star Aurelijus Pukelis was unstoppable in China and topped the scoring charts with 39 points in 5 games.

He was looking at the stands 😱🤯 #3x3WT pic.twitter.com/Vt69KTvJ4N

He forms a deadly duo with sharpshooter Marijus Uzupis as the Lithuanians will boast a full-strength team in Jeddah. Their toughest test is expected against No.5 seeds Ulaanbaatar MMC Energy (MGL) whose Utsunomiya Final dreams are still alive.

The 12 participating teams - featuring eight of the top 23 ranked teams - compete for USD $75,000 and points to climb up the World Tour standings. Unlike last year, the Masters winners do not qualify directly to the World Tour Final.

The top 12 teams in the standings after the last Masters will head to Utsunomiya, Japan, where the final will be played on November 2-3.