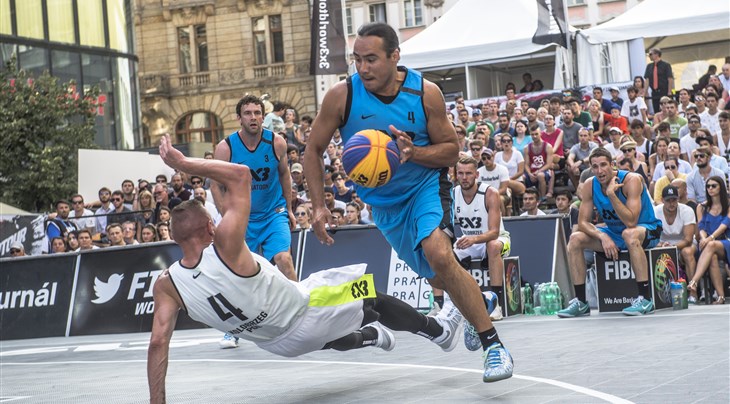 SASKATOON (Canada) - The FIBA 3x3 World Tour is back this weekend for its 4th stop of the season. We return to Saskatoon, Canada for the 3rd straight year. We got more reasons to watch the event than the number of years you aged with the Face App. Here are the top 5.

Few teams have impacted 3x3 more than Team Saskatoon. At a time where 3x3 was a European affair, the squad planted the Canadian flag every year on the World Tour. Saskatoon won 2 different Masters (Chicago in 2014 and Lausanne in 2016) and finished 4 times runners-up, including a memorable 2nd-place finish at the World Tour Final in Japan back in 2014.

After 7 years competing on the World Tour, the 36-year-old Michael Linklater will retire at the end of the season. His play at the Saskatoon Masters will likely be his last World Tour appearance ever. Dude might only be 5ft 10in. but he will leave a giant void on the 3x3 scene. More than a baller, Linklater has been a charismatic ambassador not only for 3x3 but for Canada in general and his first nation community. Nobody nailed the post-game interviews the way he did. Oh and yes his handles were "fine fine" too.

2. Who will take advantage of Novi Sad (and Riga)’s absence?

The top 2 teams in the standings did not qualify for the Saskatoon Masters. But rest assured: we got enough talent for a Space Jam 3 in Canada this weekend. All eyes will be on Team Liman, who already won 5 Masters in World Tour history. To take the lead in the World Tour season standings, all Liman need is to reach the semi-finals. Four other teams have won a World Tour before: Kranj (SLO) and Saskatoon (CAN) – which coincidentally are seeded in Pool A with Liman – but also Piran (SLO) and Zemun (SRB).

3. When will Princeton translate their World Cup success into a World Tour title?

After 3 members of Team Princeton combined with Canyon Barry to win the World Cup in Amsterdam a month ago, some thought this was the beginning of an American domination of 3x3. We’re still waiting. Princeton did not win anything since then. They even lost in the quarter-finals of the Mexico City Masters. The squad will feature 2 of its World Champions in Damon Huffman and rim protector Kareem Maddox. The World Cup MVP Robbie Hummel will not be in Saskatoon. In his stead, Princeton will bring Top 5 season ticket holder Zahir Carrington and the most famous 6-pack on the 3x3 scene, Dan Mavraides.

Team Saskatoon came close in 2017 (final) but in the 2 previous editions, 2 European teams prevailed (Ljubljana in 17 and Novi Sad in 18). This year, 4 Canadian teams will give it a shot: the aforementioned Saskatoon, Old Montreal, Winnipeg AP and Edmonton. Edmonton started the 3x3 season with a bang with a Challenger title in Nanjing and a 2nd place in Penang and rose to 13th overall in the FIBA 3x3 Team Ranking but since May, they haven’t made it past the quarter-finals in any pro event. Still, with Steve Sir’s lethal jumper, Jermaine Bucknor’s above-the-rim authority, Jordan-Jensen Whyte’s lefty step-backs and Kyle Landry’s length and very good hands, they’re probably Canada’s best shot at a W in Saskatchewan.

5. When was last time a bunch of rookies won a World Tour event?

Probably has to be last time a U.S. team won a Masters back in 2016 (in Mexico City). The team that year was called Chicago 3BALL and featured 2 players who would go on to play in the NBA: Myke Henry and Alfonzo McKinnie.

There’s a new 3BALL team at the World Tour, this time coming out of San Francisco. The players are 23 years old on average and are fresh out of the NCAA. Frankie Ferrari and Josh Sharma both played in the NBA summer league this year and there’s no doubt San Francisco 3BALL have maybe the most basketball talent at the event. But will this translate into 3x3 IQ? All of them already got a taste of 3x3 at the Dos Equis 3x3U National Championship, which featured the best seniors in college basketball during the NCAA Final Four each year. Olin Carter and Frankie Ferrari actually finished 2nd this year with the West Coast team.

The team also finished 3rd at the U.S. National Trials this year, losing to Team Princeton in the semi-finals. The 2 teams will meet again in Pool D at the Saskatoon Masters. We’ve already prepared the popcorn and we advise you do the same.