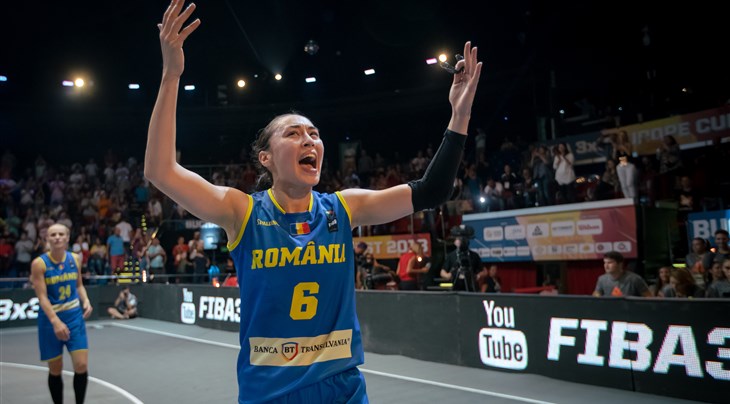 Paula Palomares (Spain)
By the time you read this, the super-skilled Spaniard may have announced her absence in Amsterdam after suffering a knee injury. If this is confirmed, we will miss her sick ridiculous crossovers and long range bombs. Even if she's out, we still keep her on the list. Even if she'd play on 1 knee, we would still buy a ticket to watch Palomares play.

Sonia Ursu (Romania)
There's not a single woman who plays with more passion than Sonia Ursu. Half-Romanian, half-Korean, 100% fire, she led Romania to the final of the FIBA 3x3 Europe Cup back in 2016. The 25-year-old is like a Tissot watch: she never stops. She's relentless driving to the basket and can shoot the 2 right between your eyes. If she gives you an L, she'll probably do it with a smile on her face, according to her motto "Savage mentality but Namaste".

Micaela Cocks (New Zealand)
So 3x3 is going to the Olympics? Micaela Cocks is like "been there, done that". The New Zealand star competed at the 2008 Beijing Olympics as a young prospect and is now looking to go back as a number one option. The 33-year-old is crafty going to the basket, has amazing court vision and can sink the two-pointer when it matters, like when she hit the Tissot Buzzer Beater against Australia at the FIBA 3x3 Asia Cup 2018.

Dora Medgyessy (Hungary)
The Hungarian star came to the spotlight in 2016 when she was named MVP of the FIBA 3x3 Europe Cup in Bucharest. While you are focused on her new hair color, she's already half her way to the basket. Medgyessy has some sneaky handles and perhaps the best court vision on the 3x3 circuit.

Minami Iju (Japan)
We fell in love with the 5ft 6in (1.68m) dragster when she led Japan to the bronze medal earlier this year at the FIBA 3x3 Asia Cup. Back in Changsha, nobody could stop the Minami heat. The 28-year-old has more handles than your favorite point guard and 4 lungs. 3x3 is fun to watch, it's the best thing on TV when Iju steps on the Enlio court.

Natalie van den Adel (Netherlands)
The perfect 3x3 athlete? If you follow Van den Adel on Instagram, you've seen here nearly dunk in practice. The 6ft 1in (1.85m) star has great size, bounce and mobility, like an heptathlon star. If you're a Dutch fan, you must be pretty excited about her leading the Orange Lions in Amsterdam after she struck silver at the FIBA 3x3 Europe Cup last year.

.@Nat_vdAdel with the sick ridiculous circus shot... Because that's just what you do when you are playing in an actual circus! #3x3Europe 🏆 pic.twitter.com/tdW5TWGpKe

Yingyun Li (China)
The 23-year-old briefly became #1 in the world last year after bringing China all the way to the semi-finals of the FIBA 3x3 World Cup in the Philippines. Not only is she a real floor general and can find more angles than a snooker player, she's a 1st class clutch player. We'll never forget her Tissot Buzzer Beater versus Switzerland at the World Cup last year.

Bec Cole (Australia)
Just in case you thought this year's Asia Cup MVP was only good enough to dominate on the Asian continent, Bec Cole led Australia to victory at the first-ever FIBA 3x3 Women's Series stop in Chengdu. Australia beat everyone there, including USA and the 2 best teams last year at the Europe Cup: France and the Netherlands. The Green and Gold are now on a 14-game winning streak. Cole has been a problem. No one has been able to lock her down. She's too fast, too strong, too active. If you get lucky and she doesn't score on you right away, she's probably already grabbed the offensive rebound and hit you with the put-back.

Rae Lin D'Alie (Italy)
We'd never ever seen anything like that. The no-look dimes and little crossovers are 1 thing, the gold medal and MVP title are 1 thing but converting thousands and thousands of Filipinos into Italian fans? That's what the pocket-sized Rae Lin D'Alie achieved last year at the FIBA 3x3 World Cup. Can she pull it off once again in Amsterdam?

Migna Touré (France)
The #1 player in the world arrives in Amsterdam with a boost of confidence after leading France to the win at the FIBA 3x3 Women's Series Turin Stop. The 24-year-old did not win MVP at the Europe Cup last year for nothing. The 5ft 11in (1.80m) star can do it all. One thing she has a common with a lot of players on that list: she never says no to a highlight play. Ankles are endangered species when Touré steps on the Enlio Court.