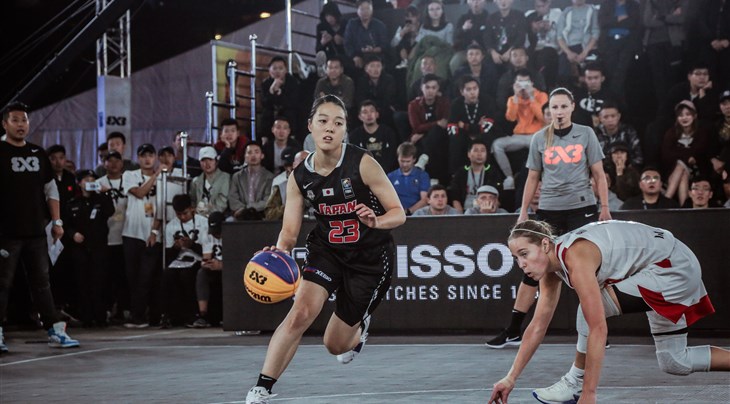 LANZHOU (China) – The FIBA 3x3 U23 World Cup is back for its second edition and here are 10 names to remember before you jump on the livestream.

You thought the men’s category was loaded with World Tour players? Wait till you read that stat:19 of these 80 women competing in Lanzhou have been on the FIBA 3x3 Women’s Series this year. Even better: 34 have already represented their 3x3 senior national team.

We went back and forth on that list and know we just made 70 new enemies but… here’s our Top 10 players to watch in the women’s category:

First one and we already cheat by naming 2 players. It was impossible to separate both Frolkina twin sisters, who led Russia to gold at the FIBA 3x3 U23 Nations League Final. Both represented their country at the Women’s Series. Olga was even on the roster that played Europe Cup and World Cup this year. Both are ranked in the Top 15 in the world. They’re not a project, they’re already among the best in the world. Don’t look elsewhere for the favorites to win gold again at the U23 World Cup. At 22, the pocket-sized Sushchyk (5ft 3in, 1.60m) is already a seasoned vet. She already brought 2 medals to Belarus in her career: silver at the U18 Europe Cup in 2015 and bronze at the European Games earlier this year. She also brought a ton of highlights, including the play of the tournament last year at the U23 World Cup: a nasty ankle-breaker that still doesn’t look old after 100 views.

The towering Wenxi Ha (6ft 3in, 1.90m) comes back to the U23 World Cup with a sense of revenge after failing to lift China to the quarter-finals last year in Xi’An. With her size, the 22-year-old can post up anyone and has a soft touch. She led China U23 to 3rd place at the XiongAn Stop of the Women’s Series and beat the senior national teams of Thailand, Mongolia and Japan in the process. She’s ready.

The speedy Majekodunmi is the only player left from that U23 French team, who dominated the U23 Nations League last year… but could not make it past the pool phase at the U23 World Cup after an unbelievable Tissot Buzzer Beater. Victoria is back this year after winning silver at the U23 Nations League and getting a taste of the Women’s Series (4th in Voiron). The 22-year-old never stops in defense and on offense, she’s got more moves than letters in her family name.

Two years ago, Orsolya Tóth became everybody’s favorite 3x3 rising star. Except the girls she dropped with her sick ankle-breakers. Her highlight plays were picked up by Bleacher Report and pretty much everyone on Instagram and the U18 Europe Cup 2017 MVP automatically became a social media influencer. While she could be chilling with her 40,000 followers, Tóth travelled all the way to China to move up age category and add another title to her collection. Not done yet.

We could have gone so many ways here cause Japan definitely ranks among the favorites to win it all in China after their second-place finish last year. Yamamoto is a special talent. Always in turbo mode, she can shoot from the logo and take you off the dribble. But her #1 skill is an unbelievable ability to find the open player. Bullet pass, bounce pass, no-look pass. She’s like Liam Neeson and Google: whatever happens, she’s gonna find you.

We wish we had found it on our own but we got the perfect nickname for the 20-year-old Ilse Kuijt. What do you think of 4K? She’s new and flashy, she’s the future like the 4K technology. She’s also the latest member of the talented Kuijt family. We knew Karin, Sonja and Fleur, who all represented the 3x3 Dutch national team. She even wears number 4!

Imanishimwe is also a journalist. Not saying that cause she can drive to the hoop and finish with the scoop. She almost got Uganda to qualify for the quarter-finals last year at the U23 World Cup and she’s back this year with her lightning-quick first step, ready to bring her country to the medal rounds. And of course make the headlines.

It’s simple: the 22-year-old is a walking bucket. She was the top scorer of the U23 World Cup last year. Top scorer of the U23 Nations League this year. And she does it in so many ways. Kondus is like ‘Pringles’. Once she pops, you can’t stop her. Bronze medal last year was just a starter for her. Add Ukraine to your list of favorites.