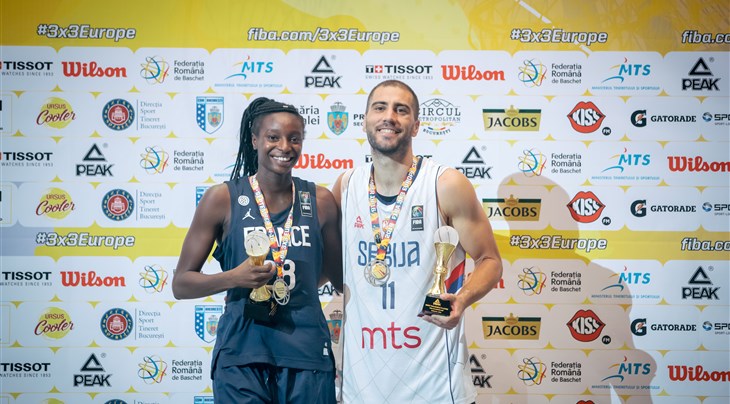 What can we say about last year's Europe Cup MVP? Mr. Bullutproof still puts fear in opponents faces whenever he steps on the court. Like no other player on the planet, he knows when and how to rise to the occasion when it matters most. After winning every possible title on the 3x3 scene, how hungry is he to lead Serbia to back-to-back Europe Cup gold medals?

At the FIBA 3x3 World Cup 2019 in Amsterdam, Michael Hicks was hotter than Debrecen in August . He led the competition in scoring with a whopping 10 points per game average. He made ‘the biggest deposit of his career’ with a 4-point play with 3.2 seconds left to beat Serbia in the bronze medal game. Dude is so confident in his shot that he doesn’t even reach for his wallet, because he know there’s enough money in the bank. Question in Debrecen is: does his bank also accept Euros?

After shining for France in youth categories (silver at the Youth Olympic Games in 2014, gold at the U23 Nations League 2018), the 23-year-old lefty is out there fighting with the big boys. Dude may look like an engineer but he will beat you inside and out with his soft touch. After reaching the quarter-finals at the World Cup, Dussoulier comes to the Europe Cup hungrier than a tourist at a French bakery.

Basketball powerhouse Spain has not been a factor in the international 3x3 Men’s competition yet. Nacho ‘DaFlow’ Martin is ready to change all that, playing 3x3 all summer to prepare for this year’s Europe Cup. To make an impact though, the Spanish big man has to play even bigger than the size of his sneaker collection.

Introducing the NEW number one 3x3 player in the world. Karlis Lasmanis is clearly playing some of the best ball in his career right now. KLM flies everywhere and is the best scorer in the game right now. Dunks, pull-ups, drives and 2’s, just pick your poison. But besides all the individual accolades, nothing would give KLM more satisfaction than for Latvia to take back the European crown that Serbia took away from them in 2018. Suspense guaranteed.

Don’t blink now, unless you want to miss a Raelin D'Alie highlight. Rae Rae is faster than 3x3. Ana Marie Filip might be the #1 ranked player in the world, but in this season’s Women’s Series, nobody has scored more points or hit more two’s than Rae Rae. After a disappointing 8th place at the FIBA 3x3 World Cup 2019, the Italian superstar is determined to use her deadly drives and sharpshooting skills to get Italy back to the medal rounds.

When she is on her game, Migna Touré overwhelms the competition like the Eiffel Tower. Ain’t no stopping the most complete player in the Women’s game today. She can drop it from 2, hit you with a step-back or finish her hard drives with either hand. Needless to say, after winning it all in 2018, Touré is aiming to go back-to-back at the Europe Cup.

Thank to my 3x3 family ❤️ Shoutout to the host who organised this beautiful event in Amsterdam 🤩 🥉3rd place at the 3x3 World Cup 🇫🇷 Proud of everybody who worked for that. Congratulation to everyone who competed 💪🏾 #fiba3x3 #3x3 #chuttedemoon #mercato #prochtoprocht #family #3x3WC

With all the hype surrounding Rae Rae and Touré, we'd better not sleep on Anna Leshkovtsheva. The perennial powerhouse Russia is not as dominant as in 2017, where they won the historic double, but as long as Leshkovtsheva suits up, they are right up there with the contenders for the gold medal. She is more all around than Ariana Grande. Look for that versatility to see her lead Russia back to the top of Europe.

We will guarantee you that nobody gets the home crowd more pumped up and on their feet than Cyesha Goree. Her athleticism and intensity make her a strong finisher around the rim and is one of the best, if not the best, rebounders in the game. Hungary were the best European team at the World Cup 2 months ago (2nd overall). Who's gonna stop them now?

You wouldn’t be surprised to see Morawiec on this list, if you had been following the inaugural season of the FIBA 3x3 Women’s Series these past months. Just ask yourself: what do Spain, France, Russia, China have in common? That’s right, they all got beaten by Poland in the Women’s Series. New on the 3x3 scene, the leader of this team quickly is making a name for herself: Aldona Morawiec is her name, pull-up J is her game.