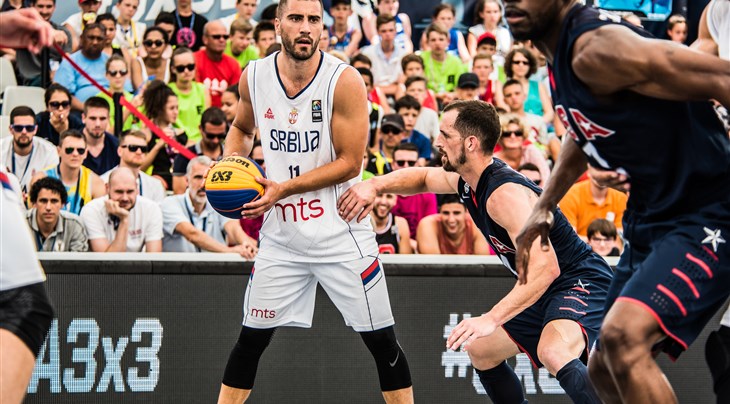 AMSTERDAM (Netherlands) – The best 3x3 players in the world will be showcasing their talents in the FIBA 3x3 World Cup 2019 in Amsterdam on June 18-23.

We have a look at the players who will take the spotlight in the most important FIBA 3x3 national team event of the year.

The charismatic Ochiai has been one of the iconic faces of 3x3 since 2012. But don't get carried away by his large smile and all-around goofiness: the man who wears number 91 in honor of Dennis Rodman plays tough and is always ready for battle. This guy calls himself 'The Worm', he sometimes plays so hard, we should call him 'Grey Worm'. Note: This was our last-ever Game of Thrones reference. The lefty big man proved Japan could aspire for medals when he carried his team on his back and hit the Tissot Buzzer Beater to win the bronze medal at the FIBA 3x3 Asia Cup 2018.

The 1st time Jobse played at the FIBA 3x3 World Cup back in 2014, the Netherlands finished 21st out of 24th. This other lefty persevered and put his country on the map (silver medal in 2017 and 2018). His Lonzo-esque 2-point shot is far more lethal than it looks and nobody finishes the pick and roll with more flavor. Enough with the silver already: playing in front of his family and friends, 'The Job' has 1 job next week: get the gold.

The 23-year-old Frenchman leads the new generation of 3x3 players, those who discovered the discipline in the youth categories and now can look the best players in the world in the eye. 'Mr Moustache' has a CV longer than his facial hair: 2-time U18 World Cup medalist, U23 Nations League Winner and MVP. Plus he's been on the biggest stage already: back in 2017, he played a key role in France's bronze-medal run. Dude can drive in traffic, find the open man and let it fly from behind the arc. After winning bronze in 2017 and silver in 2012, is it the year France finally strike gold at the FIBA 3x3 World Cup?

Are South Korea a lock to finish in the Top 10 in Amsterdam? Not guaranteed. Is Minsu Park a favorite to make the Top 10 plays of the tournament? Absolutely. The Korean playmaker has one of the meanest crossovers seen on the Enlio court. The 29-year-old can embarrass you more than your browser history.

Don't get us started about his age. We started calling him 'The Sphinx' because of his initials and his stoicism. Now we lives up to his nickname for he doesn't age like the Egyptian statue. The 39-year-old can drive in traffic and finish with a big 2-handed dunk and he added a dangerous shot from long range. Last time he was in Amsterdam, the 6ft 4in (1.94m) star brought Slovenia all the way to the final of the Europe Cup 2017. Don't write the guy off, he's still in his thirties.

Like Pontens, Zuev is the leader of the new school. Last year's U23 World Cup MVP is quick, has great footwork and can finish strong in traffic but there's one thing he does pretty much better than anyone else on the 3x3 circuit: he can shoot. The 22-year-old has more range than the guy with the elf ears in Lord of the Rings. And maybe more importantly: he's not afraid to shoot it in the Tissot time.

What if NBA players joined 3x3? This is Robbie Hummel's story. The former Purdue star spent 2 years with the Minnesota Timberwolves before playing professional basketball in Europe and then retiring from the game early. And just as he was starting to embrace a career in broadcast, same thing that happened to all of us happened to him: he fell in love with 3x3. The 30-year-old has great size and more range that an airport wifi. With his great basketball IQ, he can sneak in a backdoor cut and show some finesse but if he comes at full speed holding the Wilson ball like the Statue of Liberty, get off the way.

Amsterdam is where all started for Karlis Lasmanis. The kid who unanimously competed at the FIBA 3x3 U18 World Cup back in 2012 came to the Europe Cup 2017 with fewer followers than your dad's Twitter account. He left Amsterdam looking like the future number 1 player in the world. Fast forward 2 years and he's almost there, currently ranking 9th overall. The 25-year-old lefty has a mean stepback and is a Top 10 VIP with his big throwdowns. often courtesy of his partner in crime Nauris Miezis.

He's the most famous FIBA 3x3 player in the world for a reason. 'Mr Bullutproof' played in each and every edition of the World Cup and won 4 out of 5 times. The only time he didn't win, he finished second. And at 33 years old, he's still out here throwing passes that make no sense, hitting Tissot Buzzer Beaters and snapping ankles like a human banana peel. There's never a boring moment when Bulut steps on the 3x3 court.