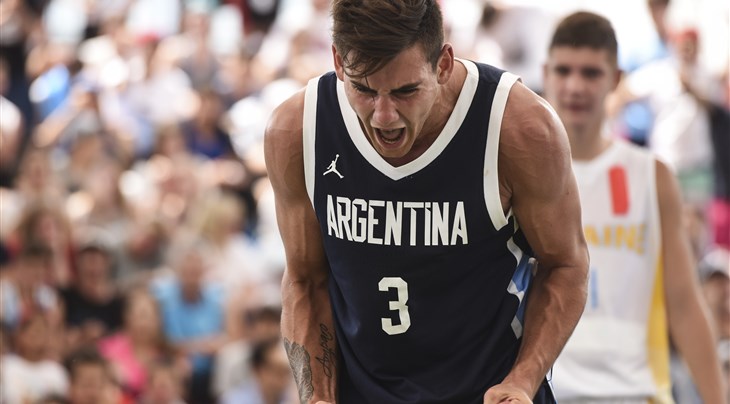 LANZHOU (China) – The FIBA 3x3 U23 World Cup is back for its second edition and this year the rosters feature more stars than a DJ Khaled album.

Think U23 is young? Think again: 16 of the players competing in Lanzhou have already competed on the World Tour. More: 19 of them have already represented their senior national team.

We had a long list of players to watch. Here’s our Top 10:

The 21-year-old caught our eye – and a few bodies – earlier this year at the Asia Cup. He almost single-handedly put Kazakhstan on the 3x3 map by leading his team to the semi-finals of the Asia Cup with his mix of range and ability to slash to the basket. The fact his name sounds a little like R.Kelly is not a coincidence cause this guy believes he can fly.

He’s the future of Mongolian 3x3. The 22-year-old Ariunbold seemed faster than Usain Bolt when scored 10 points in the quarter-finals of the FIBA 3x3 World Tour Los Angeles Masters, powered by L.A. Times in a crazy upset win against Piran of Slovenia.

The 6ft 4in (1.94m) Bulanovas was a revelation with Team Kaunas (LTU) at the World Tour Lausanne Masters last year and we thought we’d see a lot more of his deadly step-backs this season after he was recruited by Russian 3x3 powerhouse Moscow Inanomo. One year later, the 23-year-old has yet to play in his 2nd Masters. It’s been a long wait. We haven’t been as excited for a comeback since Mad Max II.

He was the biggest star of the Youth Olympic Games when he won gold last year in Buenos Aires. The son a former basketball Olympian is following in dad’s footsteps. The 18-year-old is the total package. The only thing prettier than his jumper is his Hollywood smile. Don’t believe me? Ask his 30,000 thousand Instagram followers.

At age 21, Nedim Muslic played more international 3x3 tournaments than many 30-something vets. His lethal post moves, long distance range and his little bounce exploding to the rim brought Qatar a world title in the U18 category in 2016. The 6ft 6in (1.98m) rising star is ready to move up category like Vasyl Lomachenko.

With his wide frame and his soft hands, the 23-year-old Ozolins was key in Latvia’s silver-medal run last year at the U23 World Cup. Dude even finished 4th overall in scoring. Unlike his former team-mates Armands Ginters and Roberts Paze, Ozolins did not get a chance to play on the World Tour yet. But don’t act surprised if he ends up having the brightest 3x3 future of them all.

Here’s our favorite for gold at the dunk contest. Too bad the ‘Flying Dutchman’ nickname is already taken cause Dylan Van Eyck can shake our Schelde rims like a Polaroid picture. The dude’s got a little swag too, call him 'Dylan Van Exel'. If you don’t know your history or you’re too lazy to looks it up, I’ll just say Van Eyck is a problem. The team playing defense surely call him 'Dylan Van Headache'.

Three years ago, Fabricio achieved one of the greatest comeback in 3x3 history, with an impossible steal and the clutch free throws to send Brazil to the final of the U18 World Cup in Kazakhstan. The elegant playmaker was later named MVP of the competition. We haven’t seen the kid in 3 years but all we can say is we hadn’t seen a Brazilian drive in traffic so expertly since Ayrton Senna.

This is the improbable story of a Chinese player who combined with 5 Serbian players to become the most successful professional 3x3 team this season. With his silky smooth jumper and his pesky defense, Peng Yan became an integral part of Team Liman (SRB) this year and made 2 World Tour appearances in Chengdu and Prague. The team made history this year by qualifying to each one of the 11 Masters of the World Tour season.

To finish off this list, what else than the reigning MVP? Last year’s U23 World Cup was really the coming-out party for the Russian sharpshooter, who scored 61 points in 7 games. The point difference between Zuev and the 2nd in the scoring charts was the same as the difference between the 2nd and the player ranked 20th. After being dubbed as 3x3’s next superstar, AZ hit the brakes in his 2nd 3x3 season. Will the U23 World Cup bring back good memories and put him fully back on track to stardom?