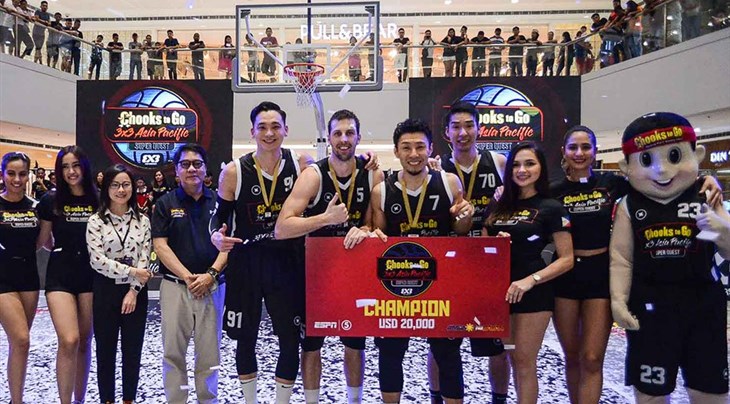 MANDALUYONG (Philippines) - Tokyo Dime (JPN) had to go through the wringer, but they eventually succeeded in lifting the top prize of the first ever 3x3 Asia-Pacific Super Quest held at the SM Megamall Fashion Hall on April 6-7, 2019.

Tokyo Dime won, 22-20, in the Final after rallying from a late 20-18 deficit against hometown favorites Chooks-to-Go Bataan. Filipino forward Santi Santillan's mental lapse in the final minute of the match allowed the Japanese squad to regain possession en route to pulling the rug from under the home team.

The result meant Tokyo Dime completed a 5-game sweep of their Asia-Pacific Super Quest matches, defeating teams from Hong Kong, New Zealand and both entries from the Philippines. Tomoya Ochiai, ranked 88th in the world and 1st overall in Japan, led the team in the Final with 6 points, while Serbian reinforcement Petar Perunovic, who is ranked 42nd in the world, added 5 for the champs.

"Good fight. It was a physical game, a tough game and I like it. Filipino guys are very tough," said Ochiai.

As for Chooks-to-Go Bataan, collegiate superstar Alvin Pasaol led the way with 7 points even as Travis Franklin added 6. The Bataan squad ended up winning 3 of their 5 games in the tournament, beating Anytours M1 Hong Kong, SSLC China and Jakarta West Bandits Indonesia. Their 2 losses both came at the hands of the champs.

Despite the loss, Bataan will join Tokyo Dime for the first FIBA 3x3 World Tour Masters of the season in Doha, Qatar, which will take place on April 18-19. Tokyo also qualified to see action at the Penang Challenger on May 12-13.

Unlike their higher-seeded compatriots, Chooks-to-Go Pasig, the Bataan side were made up mostly of college players. Pasaol, in fact, is the current record-holder for both the highest single-season scoring average for a local and the highest single-game scoring total (49 points) in the Philippines' top collegiate league, the UAAP. Santillan, for his part, just finished his playing years at the De La Salle University.

Your whole life is a direct manifestation of the thoughts that go on in your head.