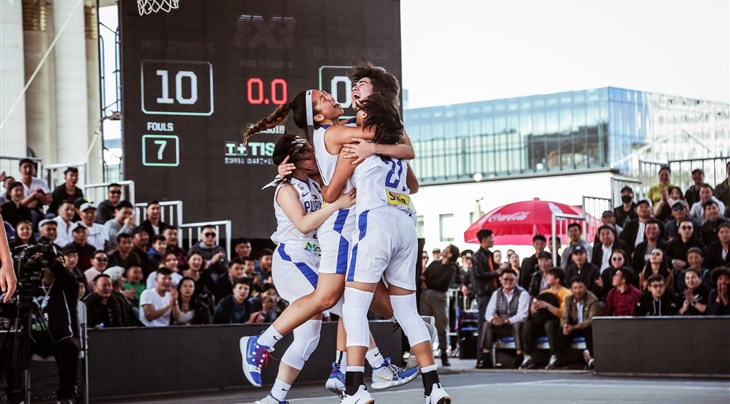 Russia’s Men continued a great start to the 3x3 U18 World Cup with Danila Chikarev leading the team to book their spot in the quarter-finals with victories over Turkmenistan (15-19) and Dominican Republic (14-17).

Ukraine recovered from a loss on day one to secure the second spot in the pool with dominant victories over Kazakhstan (10-22) and Turkmenistan (22-6).

Argentina cruised to victory over Kyrgyzstan (8-16) before defeating Romania (21-17) to stay undefeated in Pool D as Mateo Diaz displayed his full repertoire of skills. Romania were able to pick up victory over Brazil (15-18) earlier in the day to secure their place in the quester-finals to face Russia.

China’s Women remained undefeated in a convincing fashion with victory against both Egypt (8-21) and Ukraine (21-8) to advance as the number one seed out of Pool A. The strong scoring presence of Xianglin Wu leading China with a tournament-high 35 points through four games of action.

Sixteenth seed Mexico were also able to advance in the Women’s competition with strong wins over Egypt (22-13) and Sri Lanka (13-9) as Karina Esquer Vila produced for her team with 22 in the first four games.

France battled through injury to remain undefeated in Pool C and progress with victory over Czech Republic (12-17) and hosts Mongolia (18-9) with N’dye Mayé Touré continuing to dominate inside to steady the team.

The Philippines survived close games against The Netherlands (10-9) and then Czech Republic (15-14) by way of the Tissot Buzzer-Beater in overtime.