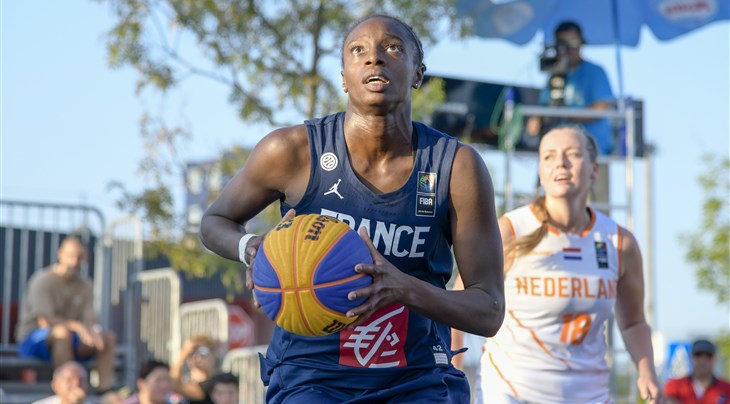 MIES (Switzerland) – 2019 was a big year for women's 3x3 with the launch of the FIBA 3x3 Women's Series and while dozens of new faces emerged, we looked at the 10 women who ruled 3x3 this year, in no particular order.

Migna Touré had some season. She was the key to France winning the inaugural Women's Series, where the 25-year-old claimed the MVP. Touré is a wizard with the ball and has moves tastier than croissant aux amandes.

She was the leading scorer for 'Les Bleues' in the Women's Series with 198 points in 38 games. She was 3rd overall in points and 2nd in drives and total highlights. What makes her a standout is her cold blood underlined by being the only player to hit three buzzer beaters this year,at the Women's Series... all of them to win a title (Ekaterinburg twice and Udine).

Toure's insane season also included leading France to a bronze medal at the FIBA 3x3 World Cup, where she was selected in the team of the tournament.

She finished the year officially ranked No.2, and has her eyes set on the FIBA 3x3 Olympic Qualifying Tournament and the Tokyo 2020 Olympics, where ranking No.1 is the only goal.

The Chinese mega star enjoyed the greatest feat of 2019 by winning the World Cup MVP after leading China to 3x3's biggest prize.

She was unstoppable during the competition with her relentless drives to the rim and mean crossovers to lead hoops-crazy China to their first ever World Cup triumph.

She has become a household name in the world’s most populous country and expect 2020 to be even better for one of the most skilled players in 3x3.

Canada became literally unbeatable in the Women's Series down the stretch, winning four straight titles. The heart of the success were the dynamic Plouffe sisters who enjoyed a remarkable first season of 3x3.

They both had spectacular solo performances – Michelle against arch-rival USA in the Edmonton final and Katherine's astonishing 17-point explosion against the Netherlands in Poitiers - but so often the sisters played terrific in tandem.

The sisters finished in the top four scorers on the Women's Series and averaged a staggering 14 points per game combined.

They are imposing and few opponents have any counters. Led by the Plouffe sisters, Canada has become one of the very best teams in 3x3.

Guapo was the reliable force in France's climb to the top of 3x3's mountain. She's a natural born winner playing in 12 events in 2019 for an incredible nine titles.

It is little wonder she finished the season as the No.1 player in the game.

Mai Yamamoto helped orchestrate one of the biggest upsets of the season when Japan beat red hot Russia in the final of the FIBA 3x3 U23 World Cup.

Russia came into the contest riding a 42-game winning streak but had no answers for the pocket rocket, who was the leader for her underdog team.

She doesn't let her lack of height affect her game as Yamamoto dominates in a variety of ways, including killer handles, red-hot shooting and relentless driving like an Uber driver.

A new star was born at the FIBA 3x3 U18 World Cup with Hailey Van Lith dominating in Mongolia to lead the USA to the gold medal.

The 3x3 gold medalist at the 2018 Youth Olympic Games can do it all on the court with her serious handles and her dangerous lefty jumper.

With more opportunities ahead, it will be exciting to see if the American can find the same success in the senior category.

Soraya Mohamed will always remember 2019 for when she melted social media faster than a Woj Bomb.

With the FIBA 3x3 Africa Cup 2019 final on the line, she hit the dagger with a step back that would have made Diana Taurasi double tap.

It was a jaw-dropping moment that underline her insane skill-set and ensures Soraya Mohamed is always must watch every time she steps on the court.

She was never going to top a magical 2018 when Rae Rae won gold and MVP at the FIBA 3x3 World Cup 2018 to become the most beloved person in the Philippines other than Pac Man.

However, 2019 was still pretty impressive as she led the Women's Series in points and key assists. Despite being generously listed at 5 ft 4in. (1.63m), she managed to get 10 triple-fives on the season (at least 5 in points, rebounds and highlights). That's more than any other player (women OR men) in 2019.

Bec Cole appeared in seven events this season and won six of them. The only time she didn't walk away as a winner was at the World Cup where Australia finished fourth after losing a heartbreaker in the semi-finals to eventual champion China. She was the top scorer at that event.

Cole is one of the best leaders in 3x3 underlined by her affectionate personality. It's little wonder she is the poster girl for 3x3 in Australia – a sleeping giant of the game.

We went out with a bang! 💥💚💛🥇Finished the @fiba3x3 Women’s Series just like we started! Super proud of these girls and how much we improved over this last weekend! Hopefully this journey is just the beginning 🇦🇺💯 #3x3WS #gold #team #love #hustle @3x3hustle

The University of Oregon young gun was memorably part of USA's triumph at the Pan American Games where she was the team’ second leading scorer.

The dynamic 21-year-old, the record holder for triple-doubles in NCAA men and women combined, also made her debut in the Women's Series in Voiron to get a taste of elite 3x3.

USA! USA! 🇺🇸 Sabrina Ionescu leads #TeamUSA to the 1st ever 3x3 Basketball gold medal in the history of the #PanAmericanGames!! 🏀🏀🏀

The future #1 pick in the @WNBA Draft now has a gold to her name 🥇🥇🥇#Lima2019 #PanAmGames #LetsAllPlay #JugamosTodos@sabrina_i20 @TeamUSA pic.twitter.com/0z3yMDM6Ze