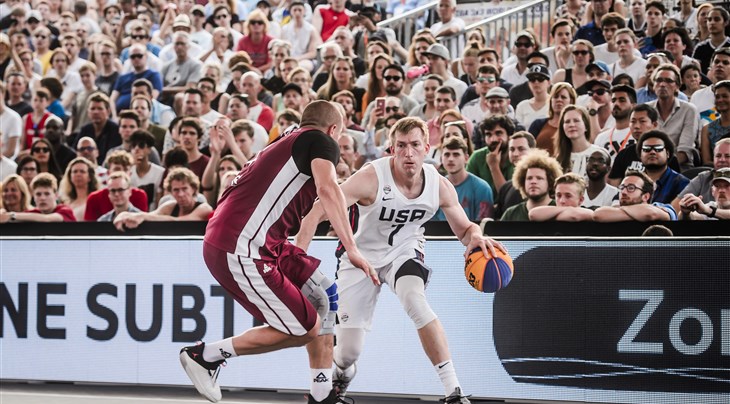 Robbie Hummel will always be remembered as the man who finally gave USA their first ever FIBA 3x3 World Cup after dominating in Amsterdam.

At his best, the former Minnesota Timberwolves player is arguably the most damaging offensive player in the game with his shooting touch, formidable size and strength impossible to stop.

Hummel helped turn Princeton into a powerhouse on the World Tour to cap off an incredible season, which culminated when he was named USA Basketball's player of the year – an honor previously awarded to legends Michael Jordan, Shaquille O'Neal and LeBron James.

Miezis had other ideas as he went from Robin to Batman and then finished as the Joker because he was the baddest man in 3x3.

Possessing a killer crossover and being a two-piece collector, Miezis has more game than EA Sports. It's little surprise he finished the season ranked the No.1 player.

No player entertained more than Dominique Jones aka Disco Domo. This isn't surprising. He has been making fans go blue face emoji with his dance moves, who belong in a 'Da Baby' video clip.

But this season he put everything together and became a cold blooded assassin. He still punked a few opponents for the Top 10s but he was far more consistent than previous years.

Domo led NY Harlem into being an elite team on the World Tour as they dominated the Challenger circuit (6 wins, a league-best!!!) and won their first ever Masters title in Lausanne.

Deservedly he won the regular season MVP and represents everything we love about 3x3 – playing with passion, pride and panache.

He averaged the most points per game on the World Tour – at 7.5 – and still does things with the ball that should not be humanly possible. That is why he was named 3x3's most spectacular player.

As always, Mr Bullutproof melted social media with his insane dimes that seem to come straight out of his magical hat.

No one scored more points than Mihailo Vasic on the World Tour this season. The most reliable bucket in 3x3? Get the ball to Vasic in the paint and he'll do the rest.

Liman had a tough time with injuries but Vasic held the team together to ensure the Serbs become the first-ever team to qualify to 11 Masters on the same season (every single one of them!).

This young gun is part of an exciting new breed of emerging Russian players. He somehow managed to secure MVP honors at the FIBA 3x3 U23 Nations League Final at the Urban Games even though his 3-man team lost in the final.

Cheburkin's breakout season also included playing at the World Cup and mixing it against the big boys on the World Tour for Gagarin.

Out of all Russia's young stars, Cheburkin could well shine the brightest.

Mido Mohamed had a performance for the ages to guide Egypt to their first ever FIBA 3x3 Africa Cup. He spat fire to incredibly score 15 points out of 21 to mummify Democratic Republic of the Congo in the final in one of the best solo performance of the season.

He led all scorers with 49 points and was a no-brainer MVP of the competition. You saw him at the World Cup in 2016 and 2017 as a young kid. Remember the name, because Mido is going to be a player to watch out for.

One of the best things about this magical 2019 season were the number of new stars born. Perhaps none better than Marijus Uzupis whose nickname 'Uzi' is one of the best going around.

The lethal lefty unleashed his clip numerously to lead Sakiai Gulbele into being a surprise packet on the World Tour. In just 1 year, the team went from unranked to the 6th in the word.

He can do everything on the court and combined perfectly with Aurelijus Pukelis to form one of the most devastating one-two punches on the World Tour.

Expect him to be even better in 2020 as he climbs the rankings.

We know this dude's time is coming. Because he's destined to be a star. Van Eyck has the flashy smile and the flashy game where he can walk on air. The Dutchman led all scorers at the FIBA 3x3 U23 World Cup to underline his ability to rise to the occasion on the big stage.

Whenever he debuts on the World Tour, you know one thing is for certain. Dylan Van Eyck will be a regular on the top five plays.

Under the highest stakes, Michael Hicks had the craziest performance since Christian Bale in American Psycho.

In winning time, no one is better than Michael Hicks aka Money in the Bank who cashed out on mighty Serbia in the bronze medal game at the World Cup.

His dagger has to be watched multiple times to be believed and he finished with an incredible 13 points and 8 rebounds to knock out the four-time champs.

Hicks scored an insane 71 points in 7 games to underline his mastery on the biggest stage in 3x3. Simply the most spectacular performance of 2019.