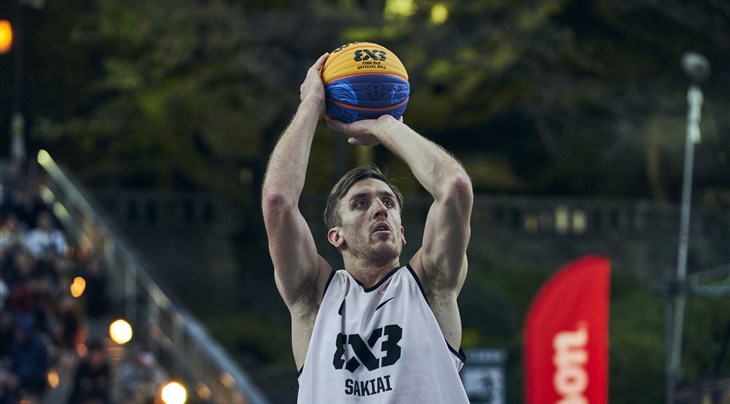 MIES (Switzerland) – It was a breakout year for many talented players during this most memorable World Tour season.

We had the tough task of trying to identify the top 10 rookies on the circuit in 2019 – an almost impossible assignment made more difficult as we chose not to select more than one player per team.

Here is our selection.

The lethal lefty was the key to Sakiai Gulbele's rise into a powerhouse on the World Tour. He spectacularly led them to a breakthrough Montreal Masters title, where he won MVP honors. Uzupis can do it all the court – he has a lethal J but is also hard to stop at the rim.

He combined beautifully with Aurelijus Pukelis to deliver a one-two punch nastier than Leo and Brad Pitt in Once Upon a Time in Hollywood. You know he has made it when Kyle Montgomery – the voice of 3x3 – coins a catchy nickname for him.

As Kyle can attest, 'Uzi' often unloaded on opponents in 2019.

Sharmageddon! Josh Sharma's monstrous Saskatoon Masters was one of the most jaw-dropping, spectacular performances of the season. He played bully ball to lead San Francisco 3ball to a third placed finish and I think the rims are still hurting in Saskatoon – the big fella had five rim-rattling slams in the tournament.

NY Harlem became a 3x3 power this season. They boasted regular season MVP Dominique Jones who made the leap this season. It was almost unfair that they added Kidani Brutus – another gunner who can heat up faster than a kettle.

Is there a smoother player than JJ? He has the moves like Jagger on the court – so much so that sometimes you wish he was more assertive with the ball. He might not fill the stats sheet like others but Whyte was the glue guy for new kids on the block Edmonton who had a brilliant debut season.

Jordan Jensen-Whyte can do it all on the court. With style, too.

The 23-year-old was a bucket-getter for the Frenchmen with his size and great shooting touch. With youth on his side, there is the likelihood Dussoulier makes a leap in 2020.

One of the best moments of the 3x3 season was from the very first Masters in Doha when Alvin Pasaol became the biggest Filipino hero since Pac Man delivered the beat down to Oscar De La Hoya.

Pasaol will need to improve his consistency but he is certainly not afraid of the moment. He is naturally cold blooded.

The Russian is a brute and is stronger than Thor in the paint. He is almost impossible to stop and the scary news for opponents is that he is only 22 years old. Karpenkov can only get stronger – and better.

He was also a key part of Russia's title winning FIBA3x3 U23 World Cup team.

The 22-year-old has the full package – he can score from everywhere, including from deep. Inconsistencies were expected and his shooting was hit or miss – but once he gains confidence there is no reason why Trajkovic can't be a 3x3 star.

He has already shown his chops on the big stage after being named in the team of the tournament at the U23 World Cup.

He just could not find his stroke from downtown on the World Tour but we are excited about this Mongolian marvel. He was cold blooded in the U23 World Cup and it feels like it's only a matter of time before he is similarly lethal on the World Tour.

Replacing Stefan Stojacic – one of the very best 3x3 players - was always going to be mission impossible for the Chinese man. There were expected adjustment problems initially but Peng Yan still proved worthy of being part of mighty Liman's lineup.

He showed enough talent to suggest he will be a player to watch next year.