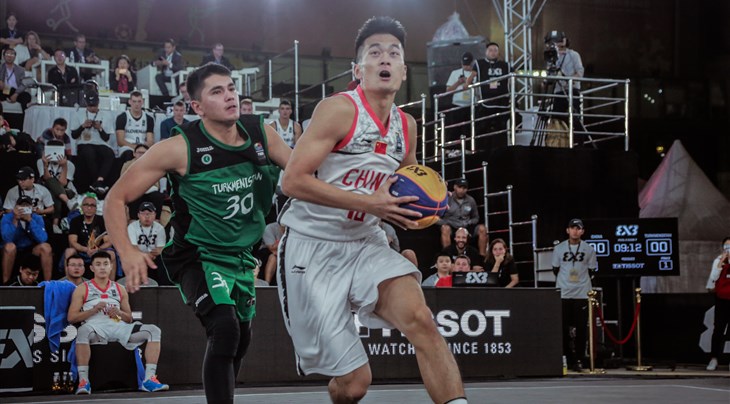 In the fourth edition of the tournament, the qualifying draw will be held on May 22-23 before the main draw on May 24-26.

Let’s have a look at the key players to watch out for.

The 6ft3in (1.90m) Wright fools opponents like it's April 1st all year. You name it, he can do it. Crossover. Between the legs. Behind the back. Like his name suggests, he always makes the right play.

He knows how to get it done having been part of Australia’s Asia Cup winning team last year.

@fiba3x3 World Cup Qualifier Day 1 in the books with 2 tough pool games against Czech Republic and the hosts Puerto Rico. Romania first up today, then bring on finals. 🏀🇦🇺

The No.1 Chinese star is one of the hottest 3x3 players in the world. The 23-year-old’s future is bright but he wants to make a statement on the world stage right now.

Move over LeBron, Yi Zheng is the new king of the chase down block. This dude jumps as if he has springs in his shoes. You can bank on him being in the tournament’s top plays.

He might be barely taller than Tom Cruise but height is no barrier for Pari, who teaches big boys a lesson like a kindergarten teacher. His insane handles and passing vision makes him do what he pleases on the court. This will mark a much-awaited return to 3x3 for the caption of the Indian national basketball team, 6 years after he showed flashes at the FIBA 3x3 World Tour Tokyo Masters.

Talking about that Tokyo Masters back in 2013, here's one of the winners. Effendi wrote one of the sickest pages in Indonesian basketball history when his team Jakarta won the event 6 years ago. Funny enough, this will be his national team debut. The 30-year-old can cross ‘em up better than anyone. Just watch those ankles, defenders!

Last night was fun.. Having a scrimmage game againts the champion of the West Bandits 3x3 Battle Tournament.. Thankyou @westbandits for having us.. So many lessons learned.. Lets keep improving guys ! @3x3indonesia #3x3Family #3x3Indonesia 📸 by @ariyakurniawan16

The 20-year-old is looking to announce himself to the world in his first appearance for the 3x3 national side. He can make the ridiculous happen such as hitting off-balanced two-pieces. Pourkaveh is a natural entertainer.

The 27-year-old is lean and mean. He’s a lockdown defender who follows opponents around the court like a shadow.

But he’s not merely a defensive specialist. Enkhbat can get buckets from everywhere on the 3x3 court and cleans up the glass like a human dishwasher.

The 20-year-old is big business in hoops crazy Philippines. He’s already appeared in a Filipino film, but it’s on the court where Rivero entertains best.

When he can’t throw down a trademark vicious slam, Rivero changes in midair and somehow finishes with acrobatic layups. And not even James Harden can Eurostep better than him.

He’s a star in the making on-and-off the court.

The 22-year-old is hoping to help put Qatar back on the 3x3 map (they won the World Cup in 2014!). And he has the game to help them vault back to the top. He can dribble expertly with both hands and loses defenders with spins like a baby’s rattle making him a fan favorite.

Making his national 3x3 debut, this dude will quickly grab your attention. He has the perfect inside-outside game. A scoring machine, Nguyen is fearless attacking the rim but can also nail the two-piece. His Eurostep is softer than suede, not surprising for a guy who was born and raised in Sweden before moving to his parent's homeland of Vietnam.

The 21-year-old stands out with his often dyed blonde hair. His game is also flashy. Heng has a killer crossover that would make AIlen Iverson blush and can knock down the dagger. He could be a character on Fortnite with his sniper abilities.