Team Saskatoon split up ahead of FIBA 3x3 World Tour 2019 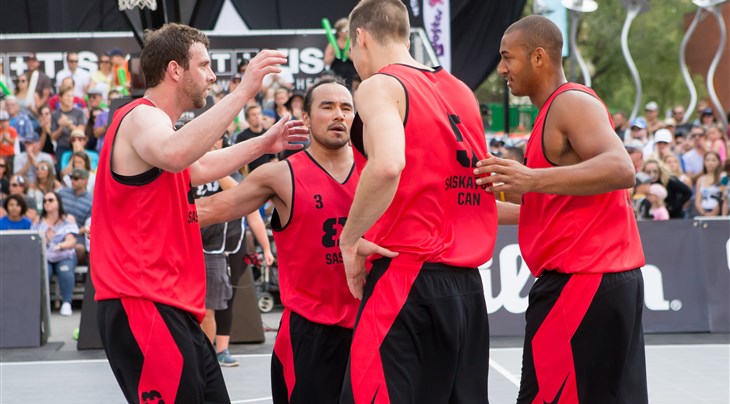 SASKATOON (Canada) - The 6 members of Team Saskatoon - one of the most decorated squads in 3x3 history - will part ways and create 2 different teams in 2019.

They set 2 historic marks on the World Tour in 2018, with the Tissot Fastest game of the season (a win in just 3 minutes and 55 seconds of play) and an all-time record for win with the biggest margin (22-4 vs. Wukesong at the FIBA 3x3 World Tour Chengdu Masters).

"IT'S A DIFFICULT CHALLENGE LIVING IN A COUNTRY THE SIZE OF CANADA WHEN YOU'RE NOT LIVING IN THE SAME CITY."- Steve Sir

The 2 original members of Team Saskatoon Michael Lieffers and Michael Linklater will continue to team up with Nolan Brudehl and 3 new players to be announced.

Jordan Baker, Jermaine Bucknor and Steve Sir will headline the new Team Edmonton, which will also feature the current member of the Canadian basketball national team Kyle Landry, along with Jordan Jensen-Whyte and Kenny Otieno.

"I've had a great 2 years playing with Team Saskatoon with some special memories," the best outside shooter in NCAA history Sir said. "I'm very grateful to have been involved and hope for strong results for them next season because we want to see Canada do as well as possible in the 3x3 world. Our greatest challenge as a group was being able to coordinate having the team together to practice on a consistent basis. It is a difficult challenge living in a country the size of Canada when you're not living in the same city."

"It has been our Achilles’ heel," now-former teammate Linklater confirmed. "Edmonton is a five-hour drive from Saskatoon. We need to take a page out of the Serbian book. They live and train in the same city. When we’ve done well last year is when we lived and trained together for an extended period of time. When we did our Asian tour last year, we reached the quarter-finals of the World Cup representing Canada and went on to win the Hang Zhou Challenger in China a few days later. It’s scary to think how good we would have been if we’d had a chance to practice together all year long."

"IF WE DON'T MAKE IT TO THE OLYMPICS, I'LL RETIRE FROM 3x3."- Michael Linklater

The number one player in Canada is back to square one, building up a team with players from Saskatoon, a city that has shown its immense enthusiasm for 3x3. The city will host a World Tour Masters for the 3rd year in a row in 2019.

"Saskatoon has a population of less than 300,000 inhabitants. There’s only 2 universities in the entire province of Saskatchewan. The pool of potential good 3x3 players is small but we will reach out to these players. You can’t have too many 5ft 10in players like me on the team so we’ll be looking for versatile 6ft 4in, 6ft 5in players who can shoot, defend, handle the ball and are quick on their feet. That’s the ideal type of 3x3 players."

The recruitment process is already over for Team Edmonton and though the team is new, Steve Sir is convinced the transition will be seamless: "It is an interesting mix as Jermaine, Kyle and myself are close friends. Jermaine and I grew up together, Kyle and I were teammates in college and Jermaine, Jordan Baker and Kyle had stints together on the Canadian basketball national team. All 6 of us love being in the gym. It's a group of gym rats that love to work and compete and that's a key component of attempting to do anything at a high level."

Canada will have at least 2 competitive teams on the World Tour this year, which could help Canada collect more ranking points and climb up the FIBA 3x3 Federation Ranking, which might be the only way to continue seeing Michael Linklater on the 3x3 scene past 2019.

"This is my last year pushing for the Olympics," the 36-year-old said. "If we qualify directly for the Olympics or for the Olympic Qualifying Tournament, I will remain active in 2020. If not, I will retire from 3x3. My body actually feels great! But it’s becoming really tough to be away from my family for so long. My kids are getting older and I want to be there to see them grow.”