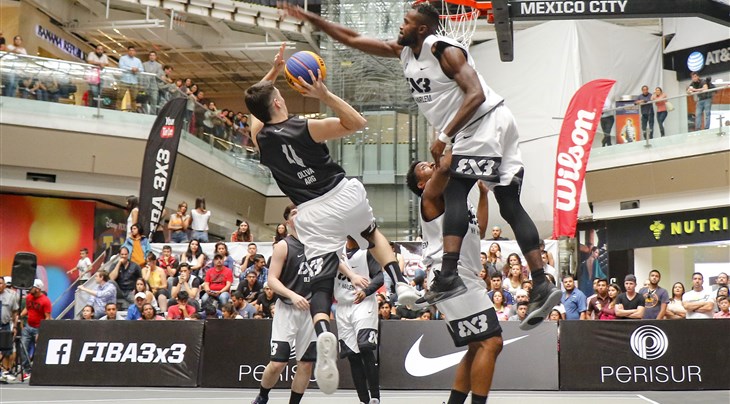 NY Harlem have some unfinished business in Mexico City. Both in 2015 and 2016, they lost in dramatic fashion in the final of the tournament. Disco Domo and co started the 2019 edition with their bandanas floating in the wind like the Teenage Mutant Ninja Turtles. The New Yorkers began the pool stage with a victory over Oliva (ARG) with Domo leading the charge with 8 points. Both Antoinne Morgano and Marcel Esonwune had a double-double. Morgano had 7 points and 6 rebounds while Esonwune had 5 rebounds and a whopping 6 highlights, including 4 blocks!

🚫 No entrance! The mall is now closed! 😤💪😱#3x3WT pic.twitter.com/CrCwwdRojp

NY Harlem stepped up their game against the #3 team in the world Riga Ghetto (LAT). Disco Domo scored in double digits (10 points), including some cold-blooded 2-pointers but it's his teammate Morganno who came to the rescue in money time with a tough off-balance shot for the win.

Two weeks after repping the US and winning the World Cup in Amsterdam. Damon Huffman and Robbie Hummel kept the foot on the gas on the 3x3 pro circuit. Their team Princeton started with a hard-fought 21-19 win against the locals from Mexico City Ruido Qro. (MEX). The sniper Craig Moore was automatic in this one. He scored 10 points, shooting 5-9 from behind the arc. Hummel added his all-around contribution with a double 5 of 6 points and 5 rebounds. They seemed like they were in pace for a clean record as they were up 19-16 against Amsterdam (NED) in their 2nd game of the day, with former NBA player Hummel scoring a day-high 12 points. But Jesper Jobse scored the last 5 points of the game. The man known as 'The Job' first delivered a 2-pointer from the wing, then he scored on a drive with the foul. So he missed the 2nd free throw for the win? No problem, he saved the day with a tough off-balance one-handed shot for the W, his 11th point of the game.

The American teams played well on Day 1 and the Serbian squads did not disappoint either: Liman and Novi Sad were the only other 2 teams to remain undefeated.

The number one team in the world Novi Sad had déjà-vu in Pool A. They won both games on the same score 22-12 (against Campinas (BRA), who made it to the quarter-finals too and The Hague (NED). Dusan Bulut went in double digits (10 points) in the game against The Hague and finished the day 3rd in the scoring charts (17 points), tied with Lasmanis and just 1 point behind Disco Domo and Hummel. He also had a pretty good pass...

Liman were ruthless in Pool B. They followed up a 21-11 defeat over Sao Paulo DC (BRA) with an impressive 21-12 win against Edmonton (CAN), which was expected to be a close game. Mihailo Vasic led the team in scoring with 14 points with his usual efficiency (he shot 13 for 17 on the day).