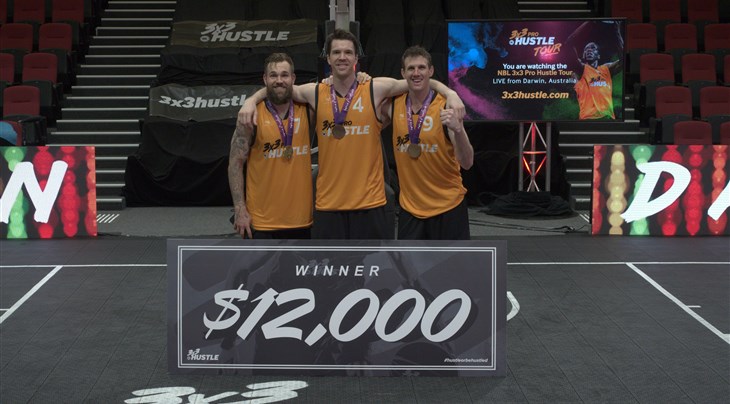 DARWIN (Australia) – A determined Stateside Sports completed a spectacular NBL 3x3 Pro Hustle - a professional 3x3 league based in Australia - in style by winning the final stop in Darwin and qualifying for the upcoming FIBA 3x3 World Tour Chengdu Masters.

The Australian team dazzled in front of local fans and completed an unblemished 5-0 record in the men’s event with a 22-16 victory over TSV Reading Cinemas in the final. It was an achievement made even more impressive with Stateside Sports using just three players – Jeremy Kendle, Peter Crawford and Lucas Walker.

Kendle was particularly brilliant and had more slick moves than Drake at a nightclub to outduel Australian national player Tim Coenraad. The event was part of the Arafura Games – a biennial multi-sports event in Darwin – and meant Stateside Sports players received a gold medal along with (AUD) $12,000 in prize money.

The triumph qualified them for the Ulaanbaatar Challenger on June 8-9. They had already qualified for the Penang Challenger on May 11-12 after winning the second stop in Geelong.

Stateside Sports also had a third-placed finish in the opener in Melbourne to be the dominant team of the second edition of the NBL 3x3 Pro Hustle and secure a ticket to the Chengdu Masters on June 1-2.

Geelong Supercats, the Melbourne winners, qualified for the Shanghai Challenger on July 27-28.

In the women’s, Australia’s number one ranked women’s 3×3 player Rebecca Cole led Spectres iAthletic to the title with a 21-10 win over the Melbourne Boomers in the final.

It was ideal preparation for Cole and her teammates Keely Froling and Marena Whittle, who are part of Australia’s team for the upcoming FIBA 3x3 World Cup Qualifier 2019 in Puerto Rico.

HUGE M🏀🏀D in Darwin as Bec Cole and Spectres iAthletic take home the @3x3Hustle Pro Tour title as part of the @ArafuraGames19 in Darwin 🏆 pic.twitter.com/HHnd8bmmf7

Melbourne Boomers player Alice Kunek is the fourth member of the national team.

It was Spectres iAthletic’s second victory after winning in Melbourne, while Peninsula Bobcats claimed the stop in Geelong.