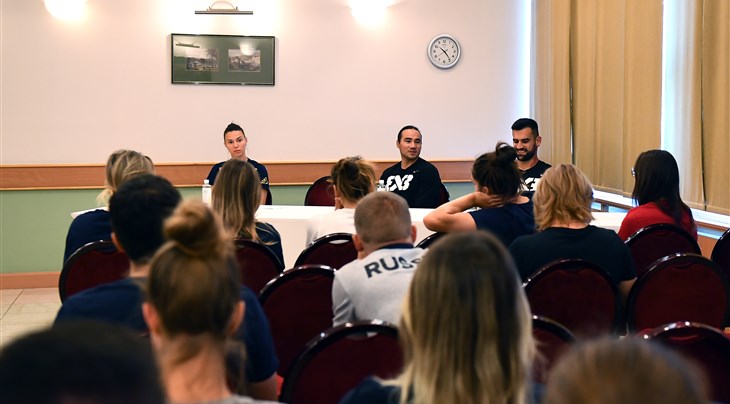 BUDAPEST (Hungary) – Some of the most decorated players in 3x3 history shared their experience and best advice with the U23 players competing at the FIBA 3x3 U23 Nations League Final.

The rising stars competing in Budapest had a chance to talk to Michael Linklater (FIBA 3x3 World Tour Lausanne Masters 2016 MVP), Mensud Julevic (one of just 3 players to compete in all 8 editions of the World Tour) and Anna Leshkovtseva (2-time European Champion, Winner and MVP of the World Cup 2017) during the World Urban Games. During the discussions, the professionalization of 3x3 and the importance of the first-ever FIBA 3x3 Women’s Series were recurring topics.

Michael Linklater (Canada) spoke highly of the opportunity to have a professional team with your own friends and make a living out of 3x3 thanks to the professionalization of the sport and the increase of the prize money all the way to 2 million USD on the men's professional circuit in 2019. For the Saskatoon native, the Saskatoon Masters was a once in a lifetime experience as he was able to compete and perform in front of his family and friends. The city actually decided to host the event after his team became an ambassador for Saskatoon by winning countless 3x3 events around the Globe. Also, the freshly-retired 3x3 star said the discipline enabled him to create a professional network all around the world that helped him both personally and in his professional career. Anna Leshkovtseva (Russia) spoke about the importance of the first-ever 3x3 Women’s Series and having a platform to play and compete at the highest level for a longer time and not only during National Team Competitions. The FIBA 3x3 World Cup 2017 MVP said that this is the right way for the professionalization of 3x3 basketball and will help the women's players in their road to the Tokyo 2020 Olympics. Russian sisters Olga and Evgenia Frolkina pointed out that a longer 3x3 season for women would be even more beneficial for the development of the sport.

Mensud Julevic (Slovenia), who started playing 3x3 back in 2012 mentioned that the level has increased a lot and now it’s possible to make a career path only in 3x3 basketball thanks to the professionalization of the tour and the increase in number of events.

The meeting triggered many discussions and was hailed a success by the participants, who got a chance to learn more about careers in 3x3, a discipline which will make its Olympic debut next year at the Tokyo2020 Olympics.