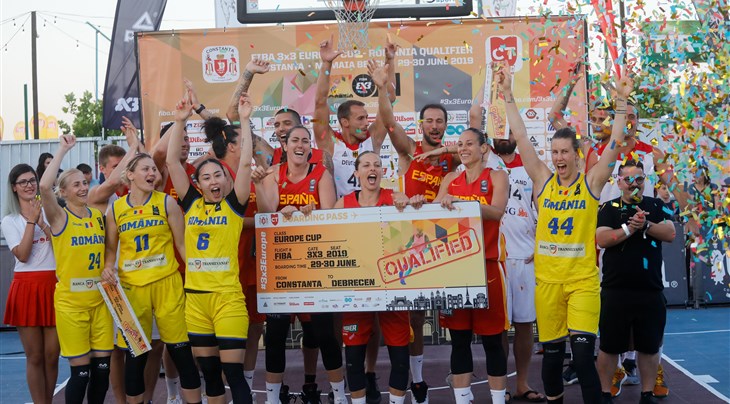 Germany got their first ever ticket to FIBA 3x3 Europe Cup in seniors competitions after a historic tournament, upsetting powerhouses Slovenia and Spain on their way to the top spot of Constanta Qualifier men’s division.

Led by the explosive guard Niklas Geske and with a stifling team defense, Germany managed to win both games in the last pool round in similar low scoring fashion, 12-10 against Slovenia and 13-11 against Spain.

That led to a win or go home last game between Spain and Slovenia, which lived up to the hype. Spain built a 4-point lead with less than 3 minutes to go. Slovenia crawled back in the game behind big baskets by Milan Kovacevic and Adin Kavgic and pushed the game to overtime.

But it was Sergio Pino who really took over for Spain. He scored the team's last six points, including the game-winner from behind the arc after a deadly pump fake. The 2016 champions Slovenia will miss the FIBA 3x3 Europe Cup for the first time in 3x3 history.

A shot that is worth much more than 2 points. Spain 🇪🇸 seal their spot in the #3x3Europe Cup 2019 with a dramatic win in overtime! @SergiPino

Germany were very close to a historic double in Constanta and things seemed to go their way after the women’s team upset the local favorites Romania, 14-13, in the first game of the last pool round.

But the Germans were held to just 8 points in a loss against Spain. To qualify, Romania had to win against Spain. Pushed by a frenetic crowd and led by the savage mentality of Sonia Ursu, Romania got their best game when it mattered the most and won against Spain 21-17, who also earned their ticket to Debrecen, Hungary, where the FIBA 3x3 Europe Cup will be played on August 30 - September 1.

Sonia Ursu came second in the scoring charts and was named the MVP of the tournaments after her heroics in the final game. The 25-year-old was the best sharpshooter of the event, nailing 18 of her 28 points from beyond the arc.

@soniaursu enlightening the whole city of Constanta with her magic ✨ #3x3Europe

Geske was named the MVP of the men’s division, after leading all scorers with 30 points.