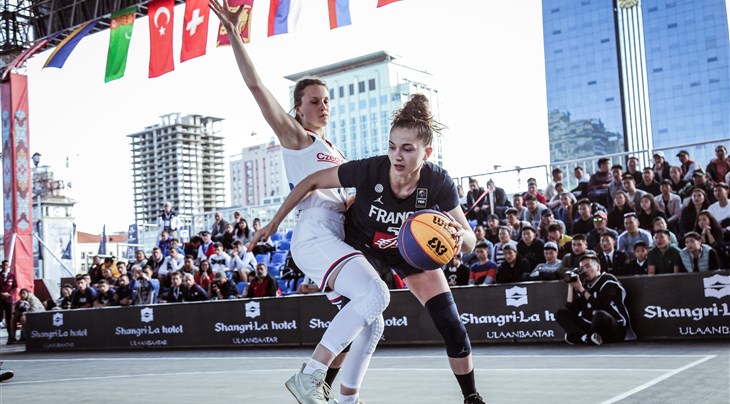 TBILISI (Georgia) - Both Serbia's men and France's women dominated the first day of competition at the FIBA 3x3 U18 Europe Cup on September 6, 2019.

In the men's category, Serbia were led by another Dusan (Simjanovski in this case) with 13 points, won back-to-back games to claim 1st place in Pool D and advance to the quarter-finals.

That's what you must do if somebody tries to break your ankles 👀@KSSrbije#3x3U18 pic.twitter.com/PESEkXO4AN

The 2018 runners-up started their revenge campaign with a landslide win over Romania (21-10) and then defeated Italy in the battle for pole position (21-15). Italy's Matteo Picarelli was a force and finished as top scorer of Day 1 with no less than 20 points, including 13 in their victory against Romania.

In men's Pool B, Israel shocked the world by defeating 3x3 powerhouse Ukraine in the first game of the day (21-15) and then Europe Cup 2017 winners Belgium (20-13), who were eliminated after losing to Ukraine in a win-or-go-home match. Illia Zaiets showed why he's one of the best 3x3 prospects in Europe after putting up 16 points in 2 games.

In the women's category, U18 World Cup bronze medalists France also finished undefeated. The Europe Cup 2016 winners showed no mercy against Belgium (17-9) and Romania (18-6) and proved why they are the favorites to win gold in Tbilisi. U18 World Cup Team of the Tournament member Lisa Dufon led "Les Bleues" in scoring with 11 points. In the last game of the Pool, Belgium defeated Romania (18-8) to advance to the quarter-finals.

Last, but not least, Germany and Hungary dominated women's Pool D and knocked out hosts Georgia.