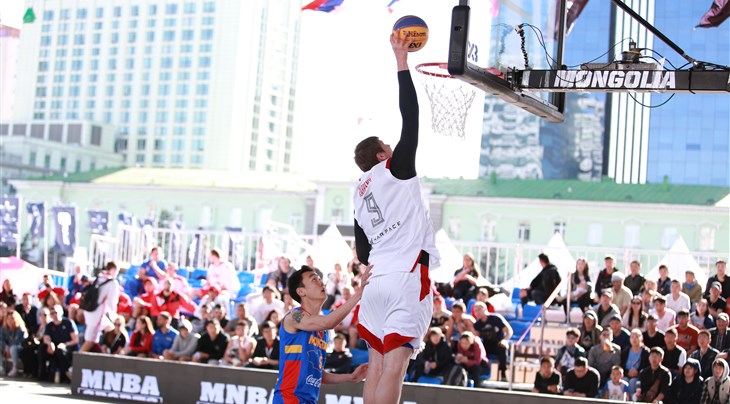 ULAANBAATAR (Mongolia) - Russia won the first 2 stops of the FIBA 3x3 U23 Nations League 2019 both with men and women in Ulaanbaatar, Mongolia on June 1-2.

The FIBA 3x3 U23 Nations League is back for a third edition and Russia had a few statement wins to open the season.

This year, the League grew from 2 to 3 conferences and 12 to 18 national federations represented both in the men and the women's categories.

The season started in Mongolia with the Asia-Europe conference, which features Belarus, China, Japan, Mongolia, Russia and Thailand.

Russia were at a different level with the men. The team won both stops in Ulaanbaatar and had a clean 8-0 record. More impressive: they won every single game before the 10-minute limit !

The entire team also plays on the FIBA 3x3 professional circuit as part of Team Korolev, which already ranks 20th in the FIBA 3x3 Team Ranking. Ilia Karpenkov was Russia's top scorer in Mongolia and none of his baskets were more spectacular than this Blake Griffin dunk against Belarus.

Karpenkov ranks second in the scoring charts after 2 stops, behind Belarus rising star Maxim Lyutich. His team finished 2nd in both stops. As a matter of fact, the standings were identical in both stops: Russia also dominated the women's category, going undefeated in 8 games as well though they did not win every game before the limit.

Ekaterina Polyashova was unstoppable in the paint in Mongolia. She topped all scorers both in Stop 1 and 2. Xuemei Pan came next in the scoring list. The 22-year-old Shanghai native led China to two second-place finishes in Mongolia.

After 2 stops, the standings in the Asia-Europe conference are:

The FIBA 3x3 U23 Nations League is back on June 8-9 already in The Hague, Netherlands with the first 2 stops of the West-South Europe Conference, featuring reigning champs (both with men and women) France, Austria, Germany, Italy, Netherlands and Switzerland.