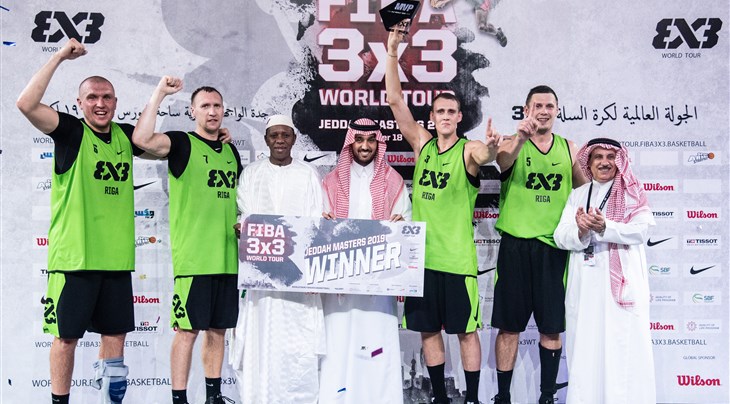 The Latvians avenged their dramatic loss in the final of the Debrecen Masters by edging out Liman (SRB) this time around in a thrilling final (21-18).

The 28-year-old Nauris Miezis capped his MVP performance with a team-high 9 points in the final, including a spectacular crossover and finish in traffic for the win. The Latvian star and number 3 player in the world led all scorers in Jeddah with 43 points overall.

Riga Ghetto went 5-0 on the iconic Jeddah waterfront despite missing their star player Karlis Lasmanis due to injury. The Latvian powerhouse won their third Masters of the season after their success in Doha and Prague.

Aleksandar Ratkov had a game-high 10 points in a losing effort for Liman (SRB) in the final. Despite its loss, the Serbian squad finished 1st overall in the FIBA 3x3 World Tour standings at the end of the regular season and - as a consequence - earned a 60,000 USD cheque. Liman made history by qualifying to each one of the 11 Masters this season.

Vadim 'Miller' Poddubchenko (Ukraine) took home the dunk contest and was awarded his trophy by His Excellency Fahad Bin Jalawi Alsaud, Director Of International Relations at the Saudi Olympic Committee.