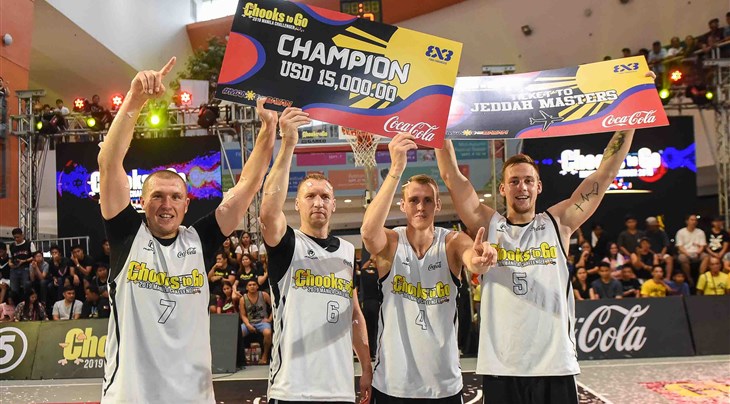 Number 2 in points per game and points against per game.

There is a reason Riga Ghetto are ranked No.2 team in the world. They boast 2 of the top 3 players in the world in Karlis Lasmanis and his sidekick Nauris Miezis, who can both score at will. Lasmanis claimed another MVP award to continue his spectacular season.

Edgar Krumins is a sharpshooter, while Artūrs Strēlnieks is tough to stop down low. When they need buckets in crunch time, Riga knows exactly what to do highlighting their chemistry and experience.

And it helps when you have ice cold Miezis, who proved to be the hero in the final.

The No.11 seeds proved to be the surprise packets after a memorable run in the Philippines. Lyon's golden campaign looked unlikely when they squeezed past Antwerp in their opener but it kick-started belief in the team.

They beat No.2 seeds Amsterdam (NED) in a thriller before outlasting local hope Pasig Chooks (PHI) in the quarter-finals. They were too good for Gagarin (RUS) in the semis but their spectacular run ended against Riga in heartbreak.

Hot shooting Wilson: Raphael Wilson - who shined for France at the FIBA 3x3 Europe Cup 2019 - was brilliant for Lyon and continually hit buckets when they needed it. He finished the leading scorer of the tournament with 38 points and shot 44% from 2-point range to underline his red hot shooting.

Riga Ghetto were the hot favorites and they started fast storming out to a 5-1 lead. They were going right at Raphael Giaimo, but the Lyon big man hit back on offense and dominated inside to get his team back in the game.

The game lifted several levels with the teams trading two-pointers as if it was a shoot-out contest. There was nothing between the teams until Riga decided to make their move. Karlis Lasmanis attacked the hoop to fuel a 7-1 run and gave Riga a 19-13 lead.

The game appeared over but you can't write off the Frenchmen, who have fought like lions throughout the tournament. Raphael Wilson heated up with a two and a dunk as Riga went cold with Lasmanis on the bench.

In a furious finish, Sammy Girma tied the scores at 20 apiece but Nauris Miezis does what he does best in the clutch. He drove to the rim for the layup to clinch Riga Ghetto's hard fought title.

Key Stats:
- No.2 seeds Amsterdam (NED) and No.4 Kranj (SLO) failed to make it to the quarter-finals.
- The classic final between Riga Ghetto and Lyon was the fifth fastest game of the tournament. (8’30” of playing time).
- Hervé Touré was a force for Lyon averaging tournament highs in rebounds, highlights and blocks.
- Karlis Lasmanis and Nauris Miezis proved once again formidable with the duo scoring 60 points combined. They finished second and fifth in scoring respectively.