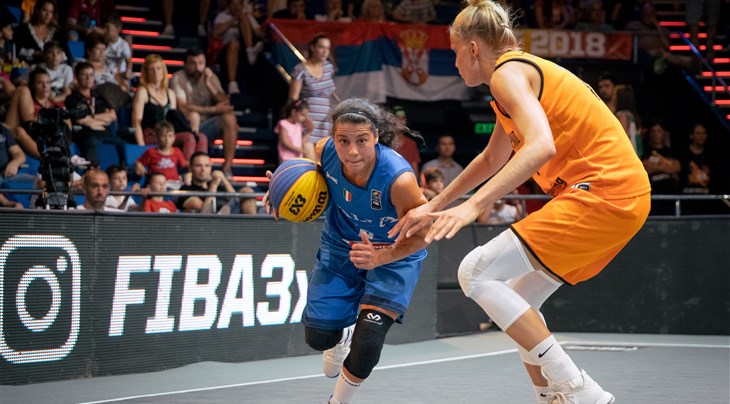 The diminutive 5ft4in (1.63m) guard led Italy to their first FIBA 3x3 World Cup triumph after stunning defending champions Russia in the Philippines. D’Alie won the tournament’s MVP and became a favorite for the basketball crazy Filipino fans who were mesmerized by her insane handles, court vision and ridiculous shot making ability.

Playing in front of such a passionate fan base inspired D’Alie to new heights. "Puso means heart in Tagalog and it is a word that sums up, for me, what we experienced from the fans," she says.

"They were energetic, passionate, and present at all times during the tournament. As a team, it was incredible to overcome our fears and weaknesses and be able to catch a dream.

"Our team of players, coaches, staff and family lived a moment that we will remember forever."

After such a magical run last year, D’Alie is currently training hard and motivated for the FIBA 3x3 World Cup mid-year knowing teams will be gunning for Italy’s crown.

"I am really excited for the World Cup. I remember the energy from the Europe Cup that was hosted in Amsterdam two years ago," she says. "Our goal is to be playing really good basketball right away.

"We know we are going to have a target on our back from last season and we’re hoping to be better than before."

D’Alie, who plays basketball professionally for Progresso in Bologna, knows the standard of women’s 3x3 will only get stronger this year. "The upcoming 3x3 competitions are going to be a great opportunity to get better," she says.

"We know there are a lot of great teams and the competition is going to be at the top level."

Tomorrow back to business 💪🏽🏀 @basketprogressomatteiplast

Even though she has experienced the ultimate in 3x3, the 31-year-old believes she can keep improving with next year’s Olympics fueling her work ethic. "As an individual I'm looking forward to growing in leadership and continuing to get better specifically as a 3x3 player," she says.

"To play in the Tokyo 2020 Olympics would be a vision come true. I have often imagined what it would be like to arrive at that level of competition and we have been working toward that goal."

Showcasing her strong passion for 3x3, American born D’Alie made the keynote address at the inaugural FIBA World Basketball Summit in China last year and was also consulted at a workshop on 3x3’s rules.

"Rules are so important when establishing anything new and to see people pull together their intellectual resources to make that happen only enhanced my passion for the game," she says.

"I was encouraged by all the detail, energy, and passion that FIBA puts into creating the best experience that people, through basketball, can offer the world."

You don’t always need a plan. Sometimes you just need to breathe, trust, let go, and see what happens.

With 3x3 gaining popularity worldwide, D’Alie is encouraged about the sport’s growth particularly in her home country. "The future for 3x3 basketball seems expansive. We are in a moment in Italy and around the world where the sport is gaining a lot of energy and passion," she says.

"In Italy we are hungry to see the sport grow and give the people of this country a fun, competitive, and enjoyable experience through 3x3.

"As it grows we hope that many can see that it is a game for everyone, everywhere."