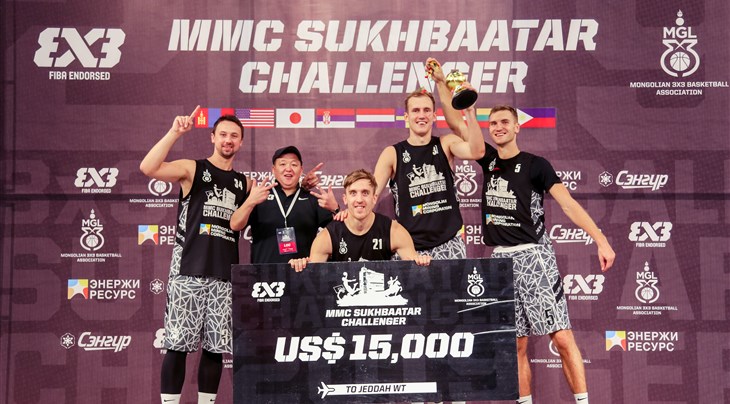 Number 1 in points per game, points against per game and rebounds.

The World No.11 are proving to be the real deal. After winning their first Masters title with a stunning victory in Montreal earlier this month, Sakiai Gulbele swept through the loaded competition.

Their toughest challenge was against NY Harlem (USA) in the semis before easily defeating Liman in the final. With the same successful line-up from Montreal, Sakiai's chemistry shone out in a balanced effort.

Aurelijus Pukelis and Montreal Masters MVP Marijus Uzupis continued their hot shooting form with a combined 67 points as the Lithuanians proved impossible to shut down.

They might have fallen short but you have to admire Liman, who continue to contend despite being shorthanded. Without superstar Stefan Stojacic, the world No.3 have been forced to suit up just three players but once again they showed plenty of spirit to make another deep run.

Mihailo Vasic was sensational with a tournament-high 42 points, while Maksim Kovacevic (28) and Aleksandar Ratkov (27) were also solid contributors.

Fighting spirit: Unsurprisingly, Liman ran out of puff in the final but can be mightily pleased with their tournament which included a memorable buzzer-beater from Ratkov to sink Ulaanbaatar MMC Energy in the quarter-finals.

For the shorthanded Liman to have a chance, they needed a fast start and Aleksandar Ratkov scored down low to get them going.

But that was as good as it got for the Serbs. The confident Sakiai Gulbele got their high-scoring game going and scored eight of the next nine points.

Paulius Beliavicius was lighting it up from downtown while Aurelijus Pukelis dominated down low. The dynamic duo could not be stopped with Beliavicius continuing to shoot the lights out and his third two-piece gave Sakiai Gulbele a massive 15-4 lead.

Running out of petrol tickets, Liman appeared set to roll over but out of nowhere they fought back. Playing with pride and purpose, the Serbs went on a 7-1 run culminating in a Mihailo Vasic two-piece to get the margin down to five points.

But Marijus Uzupis had other ideas with the lethal lefty scoring three straight points to snuff out Liman's challenge. He fittingly finished it off with a two-pointer as Sakiai Gulbele celebrated another title.

Key Stats:
- Three of the top four seeds reached the semis except No.1 seeds Novi Sad, who exited in the quarter-finals after a 21-11 thrashing by NY Harlem.
- The one-sided final between Sakiai Gulbele and Liman was the third fastest game of the tournament. (6'19" of playing time).
- Liman might have fallen short but they provided plenty of entertainment with Maksim Kovacevic and Aleksandar Ratkov each averaging a tournament leading 3.4 highlights per game.
- NY Harlem high-flyer Marcel Esonwune continued to dominate the air with tournament highs of five blocked shots and four dunks.