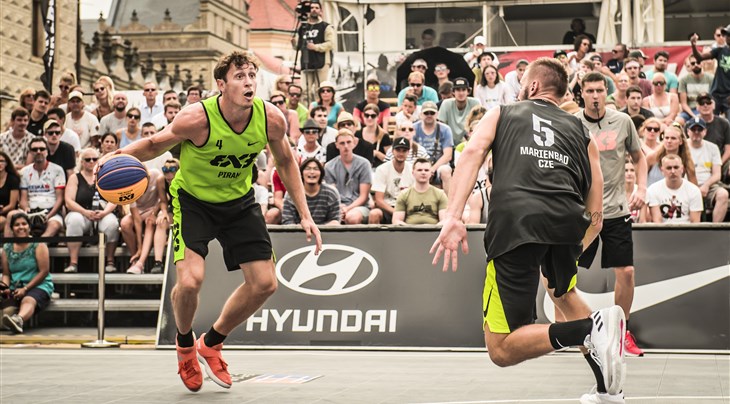 PRAGUE (Czech Republic) – Red hot Piran (SLO) are set to get an early test against Zemun (SRB) in a mouth-watering opening to the fifth Masters of the season in Prague on August 3-4. The Slovenians were victorious at the Saskatoon Masters to claim their first title on the World Tour in two years. Piran were unbeaten in Canada and capped off a memorable run with a 21-14 victory over Vrbas (SRB) in the final.

Gasper Ovnik was crowned MVP and had plenty of support as Piran made a strong statement. But Piran will be without Adin Kavgic and Anže Srebovt, who have been replaced by young guns Milan Kovačević and Tjaž Rotar.

The fourth seeds headline Pool D and will be pitted against in-form Zemun in an early showdown. The Serbs have been in strong form underlined by beating American teams Princeton and San Francisco 3Ball in Saskatoon. Zemun were knocked out in the quarter-finals by Amsterdam (NED).

The field in Prague is loaded with world No.1 Novi Sad (SRB) returning after missing Saskatoon. After winning in Chengdu and Mexico City, Novi Sad will be looking to get back on 3x3’s throne and they play Humpolec Bernard (CZE) and new kids in the block Ventspils Ghetto (LAT) in Pool A.

No.2 seeds Liman (SRB) will be aiming to bounce back from a shock quarter-final defeat to Vrbas in Saskatoon, where star Stefan Stojacic fell to his brother Strahinja. Liman have had a frustrating season and are still seeking their first Masters of the year.

They get a chance at revenge against NY Harlem (USA) in the blockbuster game of Pool B after losing to the Americans in a semi-final thriller at the Mexico City Masters. Liman will be without Maksim Kovacevic with Chinese player Peng Yan, who played in Chengdu, filling the void.

Doha Masters champions Riga Ghetto (LAT) return after missing Saskatoon and boast their full strength line-up headlined by superhero duo Karlis Lasmanis and Nauris Miezis. Their main challenger in Pool C will be Princeton (USA), who will be aiming for redemption after a winless campaign in Saskatoon.

Princeton's bid for a drought breaking Masters victory have been boosted by the inclusion of FIBA 3x3 World Cup 2019 MVP Robbie Hummel and sharpshooter Craig Moore. Kareem Maddox, another World Cup winner, will not be in Prague putting more pressure on high-flyer Zahir Carrington to dominate the air.

The 12 participating teams compete for USD $75,000 and points to climb up the World Tour standings. Unlike last year, the Masters winners do not qualify directly to the World Tour Final.