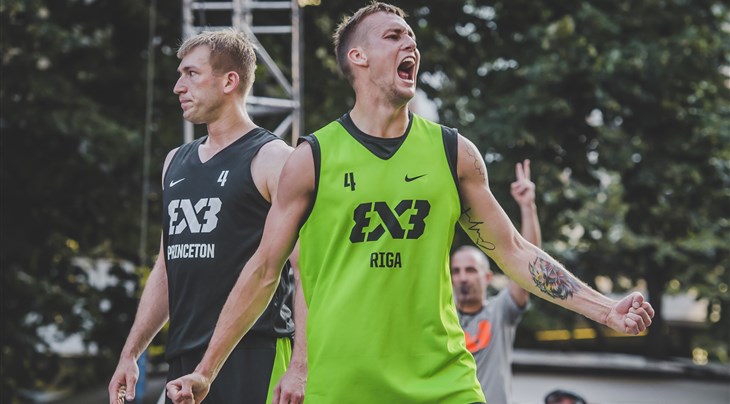 After taking out the Prague Masters, Riga Ghetto have moved up to No.2 on the world rankings and top of the World Tour standings having also taken out the Doha Masters earlier in the season.

A top-two finish in Riga will earn them qualification for the Lausanne Masters and give them a chance to keep pole position on the ladder.

Karlis Lasmanis took off on Flight KLM repeatedly in Prague and is set to get angry at the rim in front of the local fans. His one-two punch with Nauris Miezis aka Robin has been almost unstoppable and the key part of Riga Ghetto’s improvement this season.

The No.1 seeds are the favorites but will face tough competition in a loaded field, particularly if they meet No.5 seeds NY Harlem (USA). The New Yorkers have matched up well against the Latvians marked by upset victories at the Mexico City Masters and Huaian Challenger.

NY Harlem are looking to rebound after a disappointing Prague Masters, where they were knocked out by Zemun (SRB) in a quarter-final thriller.

No.2 seeds Amsterdam (NED) have had a mixed showing in Challengers but performed solidly on the big stage of the World Tour with top four finishes in Chengdu, Mexico City and Saskatoon.

They loom as contenders along with in-form Zemun, who finished third in Prague with big man Nikola Vukovic dominant – where he even hijacked Flight KLM!

That was nastier than Fifty Shades of Grey 😱 #3x3WT @nikola_vufi

Vrbas (SRB) round out the top four seeds and are another confident team having defeated Liman (SRB) and Amsterdam on route to a runners-up finish in Saskatoon.

A dark horse could be No.8 seeds Ventspils Ghetto (LAT), who impressed in their Masters debut in Prague. The talented team trains with Riga Ghetto and are tipped to be a riser on the 3x3 World Tour in the near future.

The two top teams will earn tickets for the Lausanne Masters on August 23-24 in the sixth stop on this season’s FIBA 3x3 World Tour.

World No.3 Liman headline the event in the Olympics capital. Saskatoon Masters champion Piran (SLO) and Princeton (USA) are among the teams competing in Switzerland.