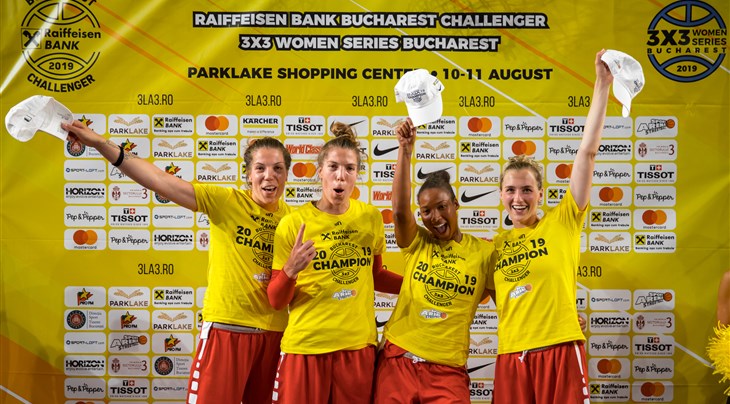 Canada won their first ever Women’s Series title with victory in Prague earlier this month and their momentum swept into Romania. But they stuttered early with a big 21-11 loss to Russia before regrouping with a 22-3 thrashing of Czech Republic.

The No.7 seeds defeated Spain and Poland in the knockout stages setting up a rematch with Russia in the decider. This time around, the Canadians were too strong with a comfortable 21-15 victory over the No.2 seeds.

Michelle Plouffe (CAN) was sensational with a game-high 9 points to cap off a dominant MVP campaign, where she topped the scoring charts with 45 overall points.

Russia lived up to their high seeding with a flawless tournament until the final. They had a balanced team effort led by Evgeniia Frolkina, who finished fourth in scoring overall with 28 points.

The shock of the tournament was world No.1 France exiting in the quarter-finals after losing a 17-15 thriller to FIBA 3x3 World Cup 2018 champs Italy. Four-time Women’s Series title winners France had won three tournaments in a row before the stunning defeat.

Italy’s dynamo Raelin "Rae Rae" D'Alie was sensational in Bucharest finishing equal second in scoring overall (30) and No.1 in highlights (19/3.8 per game).

In the overall standings, France still enjoys a big lead with 570 points but Canada have closed the gap and are outright second (410). Italy sit third with 350 points.