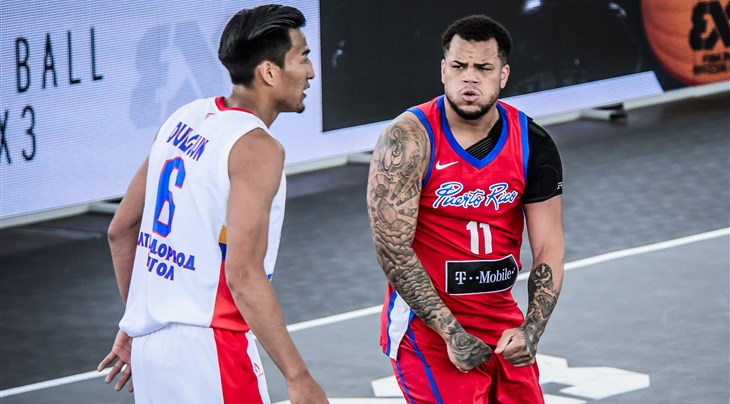 AMSTERDAM (The Netherlands) - Puerto Rico's men and China's women dominated the third day of competition at the FIBA 3x3 World Cup 2019 in Amsterdam, Netherlands on June 20.

The Puerto Ricans got hot like a Bad Bunny music video to move on the quarter-finals of the FIBA 3x3 World Cup after defeating Asia Cup runners-up Mongolia (21-18) and getting revenge over Russia (19-15) to advance as second in Men's Pool B. First was Ukraine who sent home first Estonia and then Mongolia on a Stanislav Tymofeienko Tissot Buzzer Beater

In Men's Pool D, Latvia bounced back after their loss against Poland on Day 1. They knocked out 2-time Asia Cup champs Australia and followed up with a nail-biting win over Brazil on a Karlis Lasmanis game-winner. Poland and Michael Hicks took care of business and advanced to the quarter-finals as 1st in the pool despite losing their last game against Japan.

In the women's category, China were unstoppable. They started off with the Tissot Fastest Game of the Day again Hungary (21-11) and then hosts Netherlands in a 13-12 thriller. Both China and Hungary advanced to the quarter-finals. Netherlands' women's campaign ended abruptly in Pool A.

Spain dominated women's Pool C from the beginning and didn't concede a single loss. Iran and Romania had no answer for Aitana Cuevas, who leads the scoring charts with 33 points in 4 games. Romania took the 2nd ticket to the quarter-finals in Pool C.

In the T-Mobile & Sony Shoot-out Contest Qualifier, JiaYin Jiang (China) caught fire and scored 9 out of 10 points in less than 30 seconds in the first leg of the women's qualification.