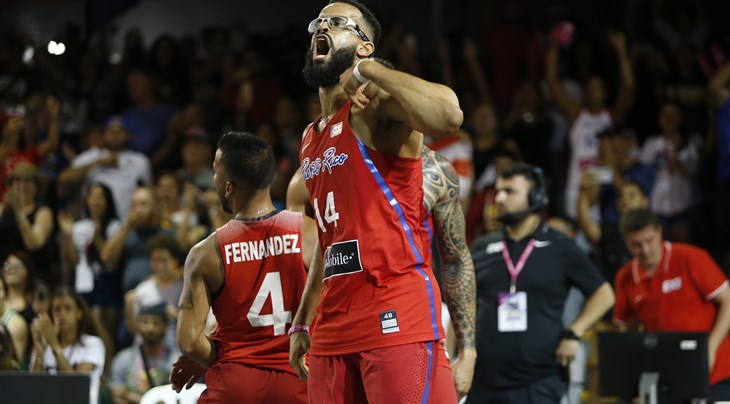 SAN JUAN (Puerto Rico) - Puerto Rico's men were undefeated and the women split games on Day 1 of the FIBA x3 World Cup Qualifier 2019 on May 4.

Playing in the historic Hiram Bithorn baseball stadium, Puerto Rico had a home run debut in the FIBA 3x3 World Cup Qualifier. Supported by their passionate fans, including Puerto Rican basketball legend and NBA player JJ Barea, the men's squad started with a 21-14 W over Romania, which had Luis 'Pela Coco' Hernandez going loco at the rim.

Puerto Rico went on to defeat Australia in a 21-17 thriller. Angel Matias had 8 points in both games and led all scorers on the Day 1 with 16 overall (tied with Bikramjit Gill (Canada) and Radu Paliciuc (ROU).

Puerto Rico did not count among the favorites in the women's category and yet their team started things off with a defeat of Estonia (14-11). Mari Placido was a problem in this game: she scored 9 points, including 4 shots from behind the arc. Things went south, all the way down under at the end of the day when Puerto Rico was downed 21-4 by Australia.

Australia's women were one of the only 3 teams which went undefeated on Saturday (they also beat Uganda 16-10). Besides Puerto Rico's men, Spain's women were the last team to make this list. They held both Brazil and New Zealand to 11 points. In the game versus Brazil, the pocket-sized Paula Palomares (5ft 7in, 1.71m officially) went off. She had 11 points and several assists, including this beauty:

None of the 16 participating teams are eliminated just yet. The action resumes tomorrow with the last pool games. After a playoff game between the teams ranked 2nd and 3rd in each pool, the last 6 games will be special. Each winner will earn a ticket to the FIBA 3x3 World Cup on June 18-23 in Amsterdam, Netherlands.

How to make it from the #3x3WC Qualifier 🇵🇷 to the World Cup 🇳🇱? Glad you asked 👇 pic.twitter.com/ajD7cznKmr