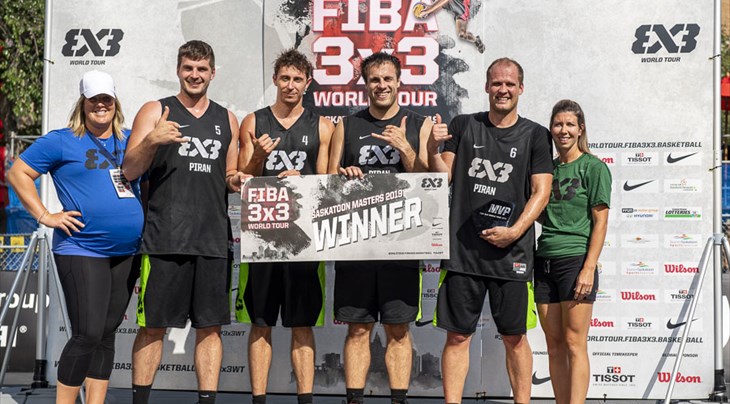 Two years after winning the Chengdu Masters, Team Piran returned to their winning ways on the World Tour. The Slovenian squad is often named as one of the most influential teams on the 3x3 scene. It features 2 of the only 3 players who have competed in all 8 editions of the World Tour in Simon Finzgar and Adin Kavgic. Their legendary passing game was on full display in Canada over the weekend. Piran led the event in key assists and had a perfect 5-0 record in the heart of Saskatoon.

Gasper Ovnik was an easy choice for MVP as he topped all scorers with 34 points overall. His biggest offensive outburst was in the quarter-finals in a close 19-17 win against Kranj (SLO) where he scored 10 points, including the 2 free throws with 2 seconds to go to seal the win.

After winning a nail-biter against San Francisco 3BALL (USA) in the semi-finals, Piran defeated Vrbas for the second time in 2 days in the final. Ivan Popovic (Vrbas) drove to the rim to make it a one-possession game (13-15) with 3 minutes to go. However, Piran replied with a 6-1 run, including 4 straight points from Anze Srebovt and the game-winner from the top of the key, courtesy of Adin Kavgic.

Vrbas reached the final for just their second appearance on the World Tour. Led by big man Danilo Mijatovic and the athletic Strahinja Stojacic, the team showed true grit by winning back-to-back overtimes in the quarter-finals and the semi-finals, against 2 of the top 4 teams in the world, Liman (SRB) and Amsterdam (NED) respectively.

Liman (SRB) missed on a great opportunity to take the lead in the season standings. Their 6th-place finish in Saskatoon means they jump to second overall and trail the leaders Novi Sad (SRB) by just 5 points. Riga Ghetto (LAT) are now 3rd overall.

In the individual contests, Canada completed a double: Kyle Landry (Edmonton, CAN) dominated the shoot-out contest while Justin Darlington won the dunk contest.

The 5th Masters of the season will be played in Prague, Czech Republic on August 3-4, 2019.