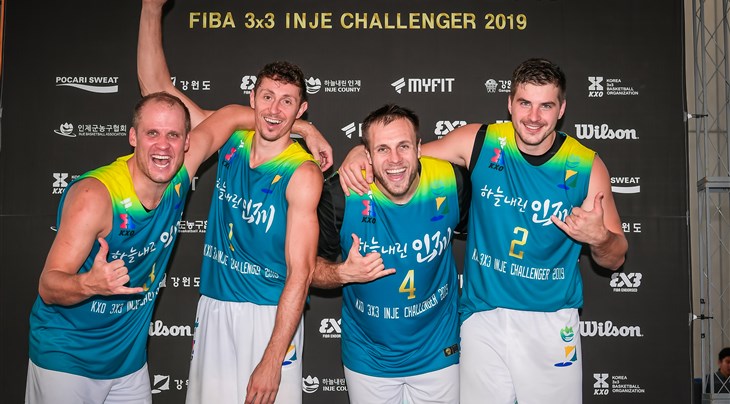 If you couldn’t make it to South Korea, here’s what you missed.

Further enhancing their record on the 3x3 circuit, the Slovenian team (Simon Finžgar, Gasper Ovnik, Anže Srebovt, Adin Kavgić) fought their way to the final to meet Princeton (USA), who they managed to defeat 15-14 in overtime and qualified for FIBA 3x3 World Tour Los Angeles Masters powered by the L.A. Times.

Amid bucolic surroundings, the Slovenians faced five fierce opponents. Opening up against Inje, they overcame the hosts 22-15, largely due to Finžgar, who contributed 12 points and scored 6 of his 8 attempts from beyond the arc.

Their second Pool B opponent was Japanese side Utsunomiya, who they beat 21-16 with a total team effort and a more interior-based offensive effort.

For their most convincing victory, Piran faced Tokyo in the Quarter-Finals and emerged victorious by in just over eight minutes. Srebovt led the scoring and made each of his 6 attempts under the basket. Srebovt continued his formidable run as he logged 9 of his team’s points in a 17-15 Semi-Final win over Ulaanbaatar MMC Energy (MGL), which earned them their successful final appearance.

First in shooting efficiency, shooting value, wins before limit and 2-point shots made.

Second in points per game and total blocked shots.

Led by Simon Finžgar, who made a competition-leading fourteen 2-point shots at an impressive rate of 47%. Buoyed by Kavgić’s 5 rebounds per game and Srebovt’s 6 total key assists.

The Americans remained focused on the Challenger, despite having already qualified for Los Angeles before the event.

They led the event in highlights, total key assists and free-throw attempts, in what was another excellent showing from the American squad.

Princeton experienced a great deal of success inside the paint. Kareem Maddox and Zahir Carrington combined for 36 inside shots made and led the tournament in free-throws attempts, with Maddox making more than anyone else on the day. The team finished third in blocked shots and first in total rebounds, as they showcased their physical dominance.

In this low scoring affair, very little separated the teams for the majority of the game. Despite taking an early marginal lead, Piran allowed Princeton to swing the balance with just minutes remaining and it became a cagey shoot-out.

Shooting from beyond the arc was streaky to say the least, with only 6 made 2-points shots out of an attempted 31 by both teams in the final. That said, Piran found a way to sink them when it mattered.

The game ended with an overtime game-winner from Finžgar with his third 2-point shot of the game. This sparked some impassioned on-court celebration, as the Slovenians crowned themselves winners on the day.

Winning the Challenger earned Piran a ticket to the Californian event, which takes place on September 20-21. As No.2 Princeton qualified prior to the event, a spot was opened up for the No.3 team – Ulaanbaatar MMC Energy. The tour will make its debut appearance in the city of Los Angeles and now has two more confirmed participants.