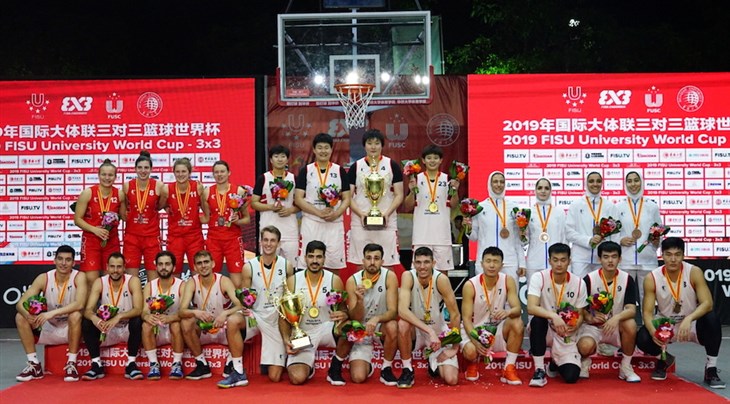 It was time for sweet revenge for Tsinghua University of China just when it mattered most, as they beat University of Vienna comprehensively in the final of the FISU 3x3 University World Cup. After having lost to the Austrians by a whisker in the group stages, regular order was restored as the defending champions dominated in the title clash.

In the men’s field, it was the first-ever title for Paulista University of Brazil who beat a fiery squad from University of Chile in the final. The Chileans had looked strong throughout the competition, especially during their 21-14 win over University of Colorado in their last group game.

However, they ran up against a wall that was the Brazilians, who worked together like a perfectly oiled machine in the final. With more than a minute and a half left on the clock, Paulista University scored the winning basket for a 21-10 victory.

“It is so great to be the no.1 ranked team in the first year of 3x3 in Brazil,” said a delighted Andre Ferros later. “Now we have to keep up the good work.”

“We feel great winning here, becoming the University World champions,” he continued. “Next year we want to be even stronger and win this event again!”

Already looking forward to defending the title, the Brazilians can take a leaf out of the Tsinghua book, as the Chinese women successfully defended the title they won with much fanfare last year. Their perfect all-round game was on display throughout the tournament, with the only hiccup coming in their last pool game where the University of Vienna pipped them to the post with a buzzer-beater from Camilla Neumann in the last second.

That luck was not to be repeated for the Austrians in the final though, as Tsinghua raced to a 11-4 lead with four minutes to go. Then, the Viennese women staged a spirited come back and with two minutes on the clock, the gap had been closed to 14-10. That was when Tsinghua shifted into a higher gear and ran away with the match. The final score was 21-11.

“We are so happy about winning,” exclaimed Ma Jiaying after winning. “We were not sure could be champions again"

Having won twice, Jiaying also had many words of appreciation for the tournament itself. “It’s very lively here. So many young players in the competition, I can feel great energy, something like what I felt during the Napoli 2019 Summer Universiade.”

“This competition may be my last for university,” she continued. “After we graduate, I and (teammate) Yang Luchenhong will join the Women's Chinese Basketball Association. And we hope to be good players at the professional level and to win more honours for our country.”

That said, the same squad will not be back to defend their title next year, when the sixth edition of the FISU 3x3 University World Cup takes place. Once again, this fifth edition in Xiamen, China, proved to be a dynamic, exciting event that provided an international platform for some of the best university ballers in the world.